Rolling is almost insensible down at Deck 6. It is down there, around center of the ship, three decks underwater. The future flagship of Indian Navy, aircraft carrier ‘Vikramaditya’ enters Severomorsk bay.

If only this city was couple of dozens latitudes to the south, it would be on guidebooks’ covers: narrow bay with hilly shores, houses along the banking, atop of surrounding cliffs, among wooden esplanade and densely-planted trees. 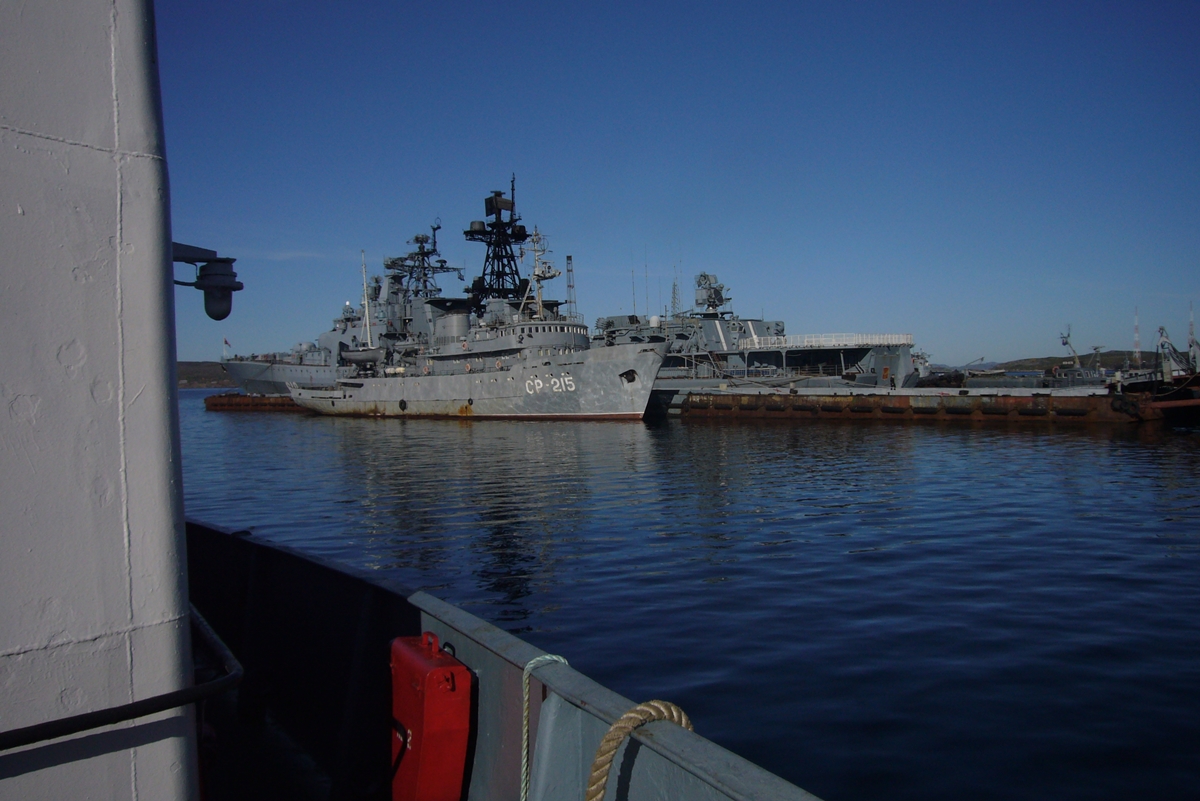 Arctic’s proximity affects surroundings in its own special way. Hilly shores are bristled with military airfield antennas. Weather-worn colossuses of apartment buildings stand on cliffs, covered with names of hometowns of all the officers and sailors who ever came here. All the trees are twisted and maimed by North.

The same could be said about the streets: there is but single strait one, Saphonova’s, which goes all the way down to the port from Officer’s club to the port. This street accommodates almost all of the city’s points of interest: museum, exhibition hall, busts of numerous war heroes, a park, almost all of the bars and a terrific kebab-tent, which only opens on weekends after lunch. Both its tables are always occupied as well as plastic chairs that seem to barely hold in one piece. In spite of the naval dry law, numerous bottles quickly appear under those tables. Kebab here is almost as if it was cooked at home: meat slabs are both juicy and large. Plastic cups are sharply tabled as if they were MiGs landing on the flight deck.

In truth, local park is not exactly on Saphonova – it’s a little to the side. Sand, flower beds, compulsury Lenin monument and there is no asphalt or paving stones, sand only. Only by the very entrance there is five, maybe six lines of paving. Local authorities and media are cutting some ribbons there almost every time we get a shore leave. Serpent-like Sgibneva street divides the city into 3 parts. Saphonova street. Sgibneva street. Sivko street. Town of Severomorsk. Such is the humble magic of proper nouns. Walking down the park’s main alley we get to Muzhestva (Valour) square. There is a ‘mosquito’ boat on pedestal and military base and a submarine, lightet by the weld works from inside behind a fence.

– Hey, guys! Where’s the museum around here? – I ask workers at their smoke an lunch break.

– Here it is, — one of them points at rusted submarine. — Can’t you see we’re repairing it?

Seagulls toddle around military base and only huge and shaggy dogs chase them around. Fat and blase, these dogs leasurely and in large numbers roam around tangled and winding streets, that break down to several ones. Severomorsk people, on the contrary, have mostly duchshunds, greyhounds and terriers walking beside them on a leash. They are not on the leash by groceries though, they orderly, with no barking and squalling, as any dog in the naval family would.

By the by, navy sailors can be seen only by the seaport terminal, from where they are taken to Murmansk. Those who stay here for the shore leave are strongly advised against wearing uniform. You can easily tell them from the rest, since their route is not limited to bar and grocery store, let alone that they walk around with their wives and children and not in the groups of five, waiting for the restaurant to open.

Arctic takes its toll in public catering as well: menus all around the town consist mostly of seafood. Codfish and halibut are leading by a landslide. They are used everywhere from pies and pizza to salads, soups, main dishes and, of course, sushi. No matter what,illusory Mediterranean slowly sinks into surroundings – nobody is in a rush.

You could say that it does not take an hour to cross the whole town. It would not be exactly true, though. This town only seems little, while it sucks person in like a vortex, it turns into quicksand, it bends time itself. What can an hour possibly mean for such town? 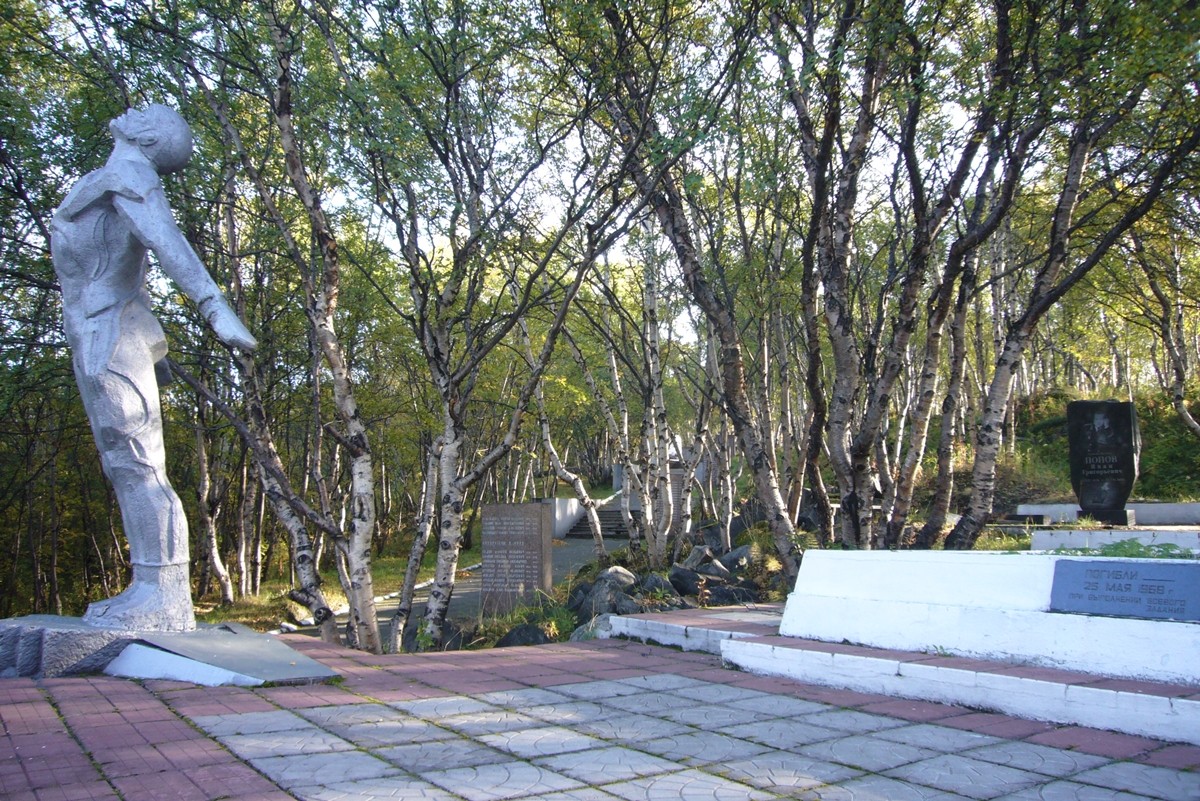 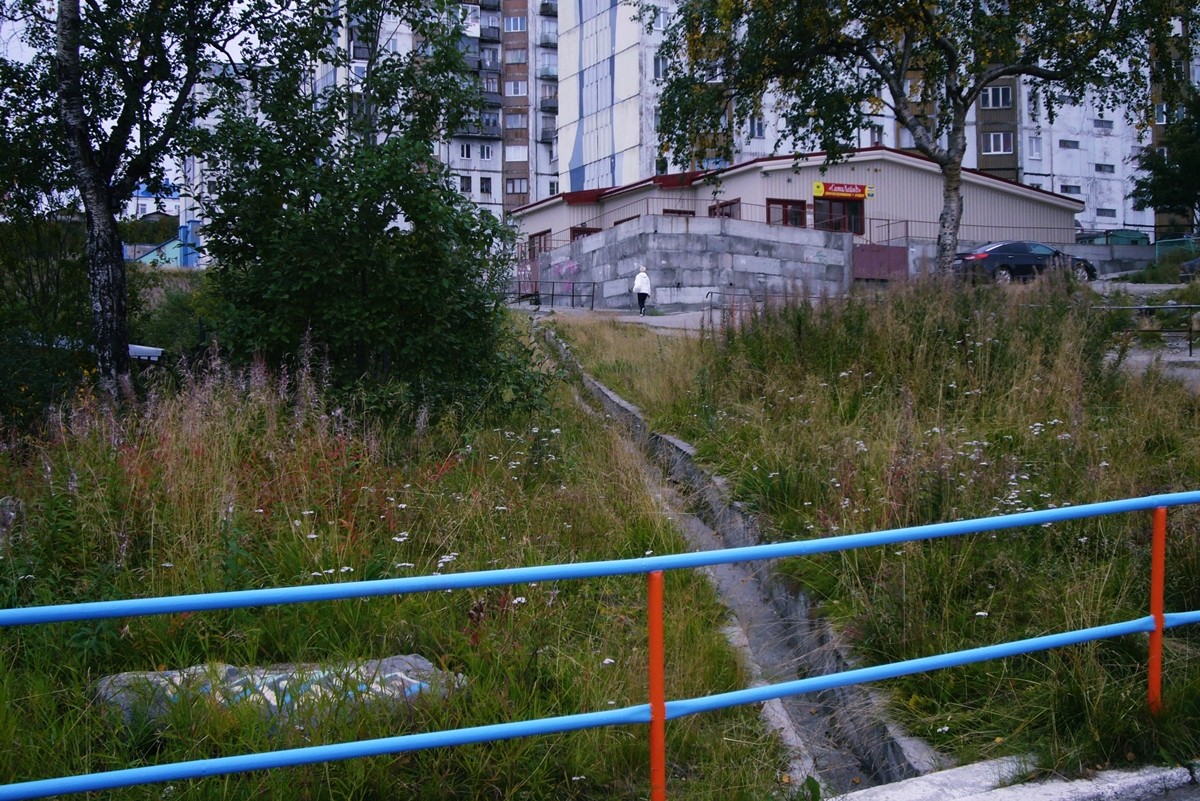 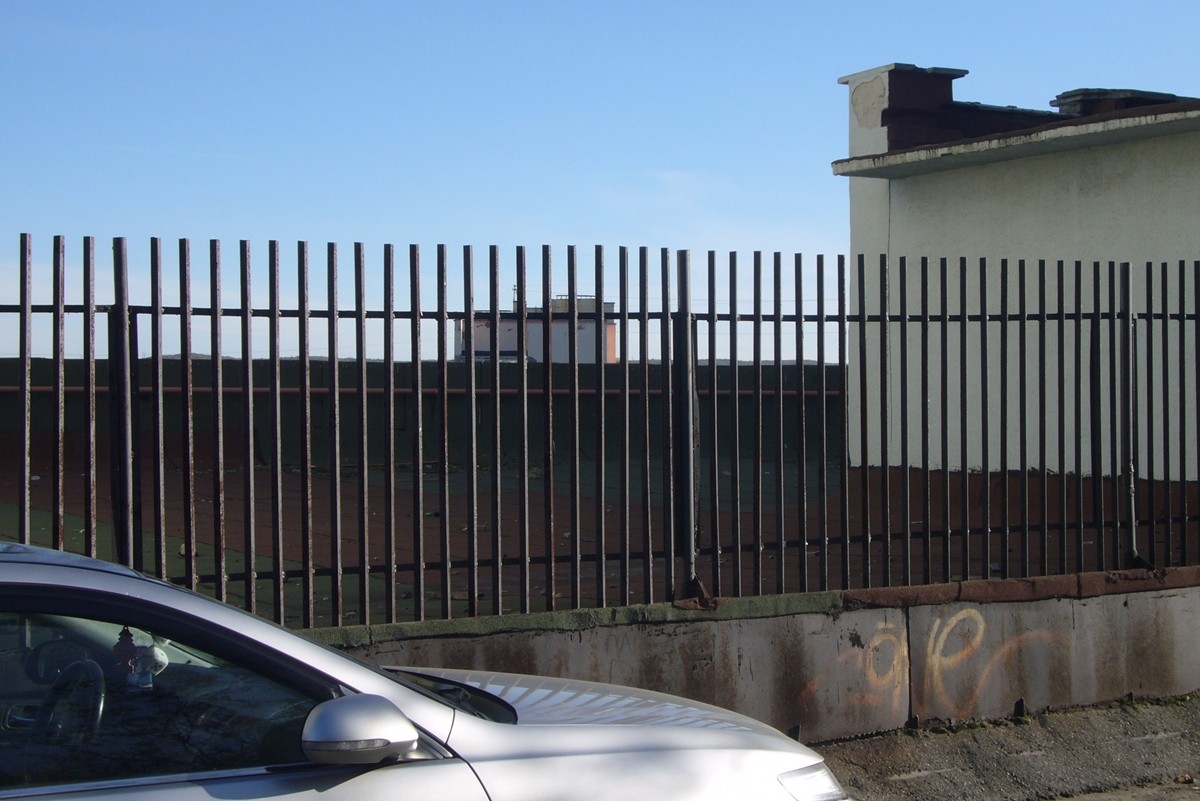 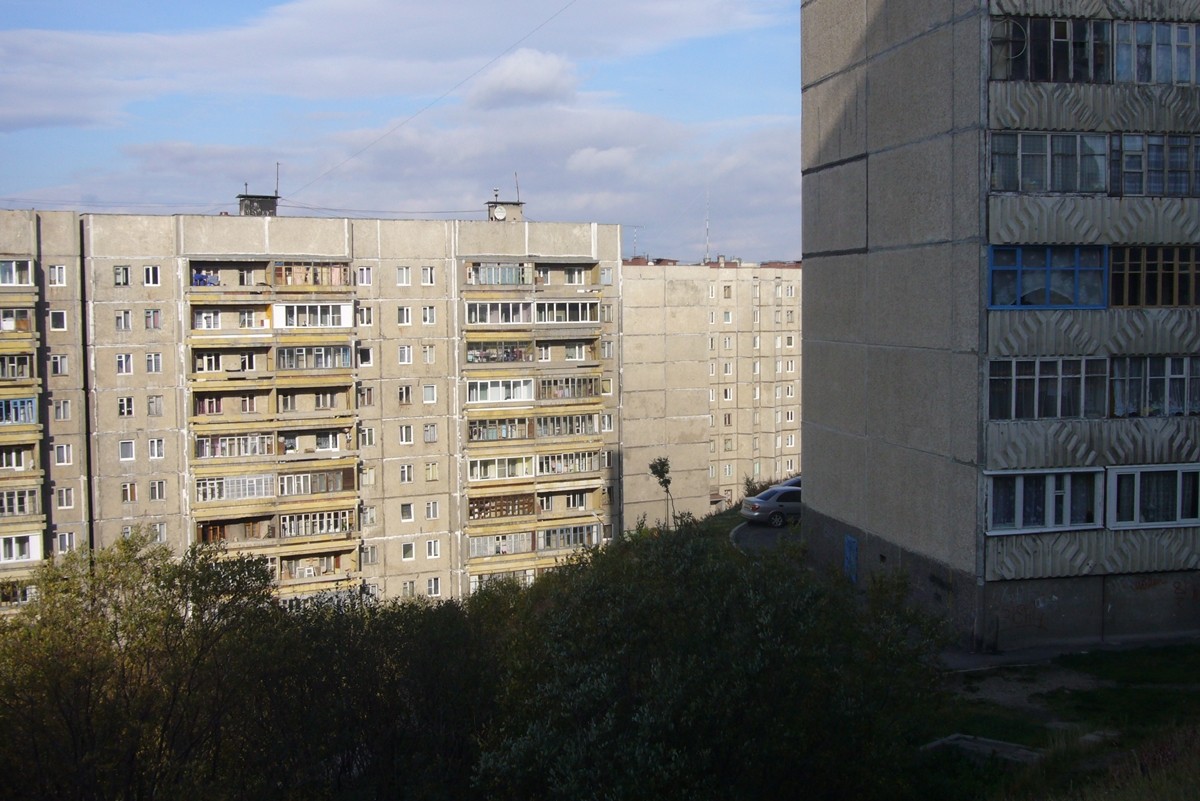 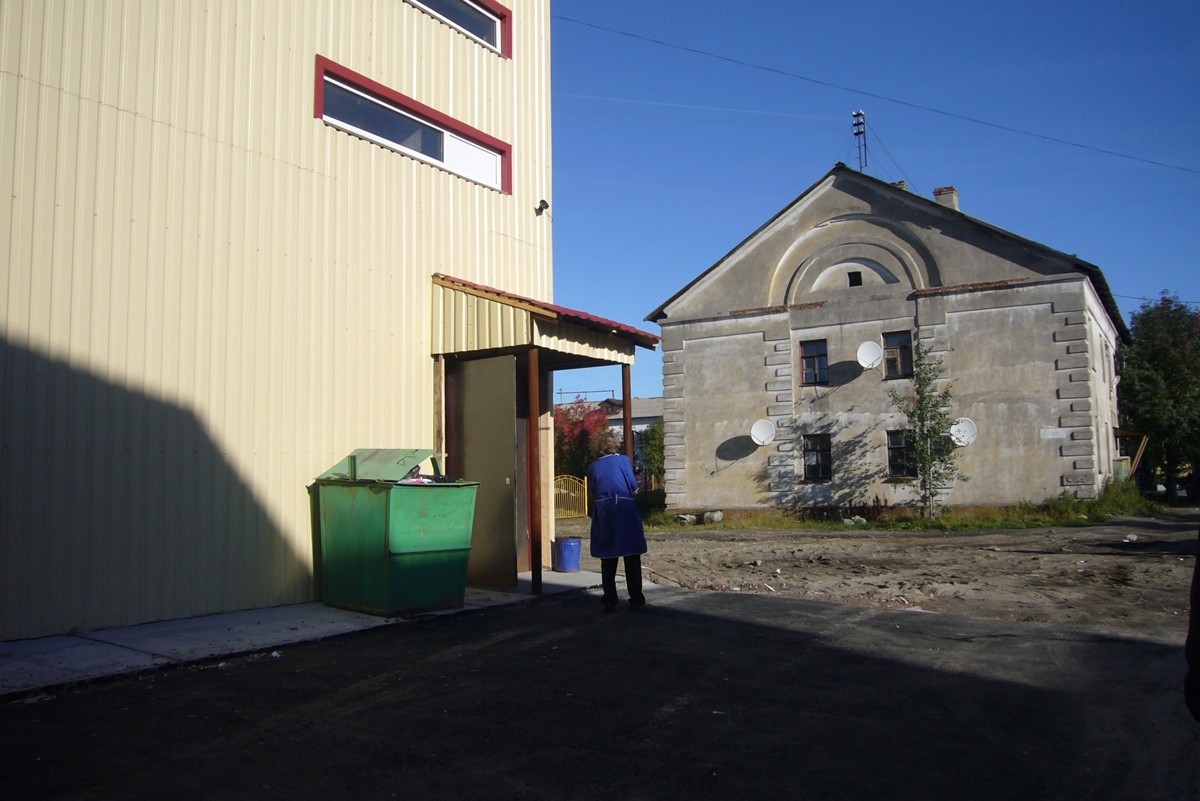 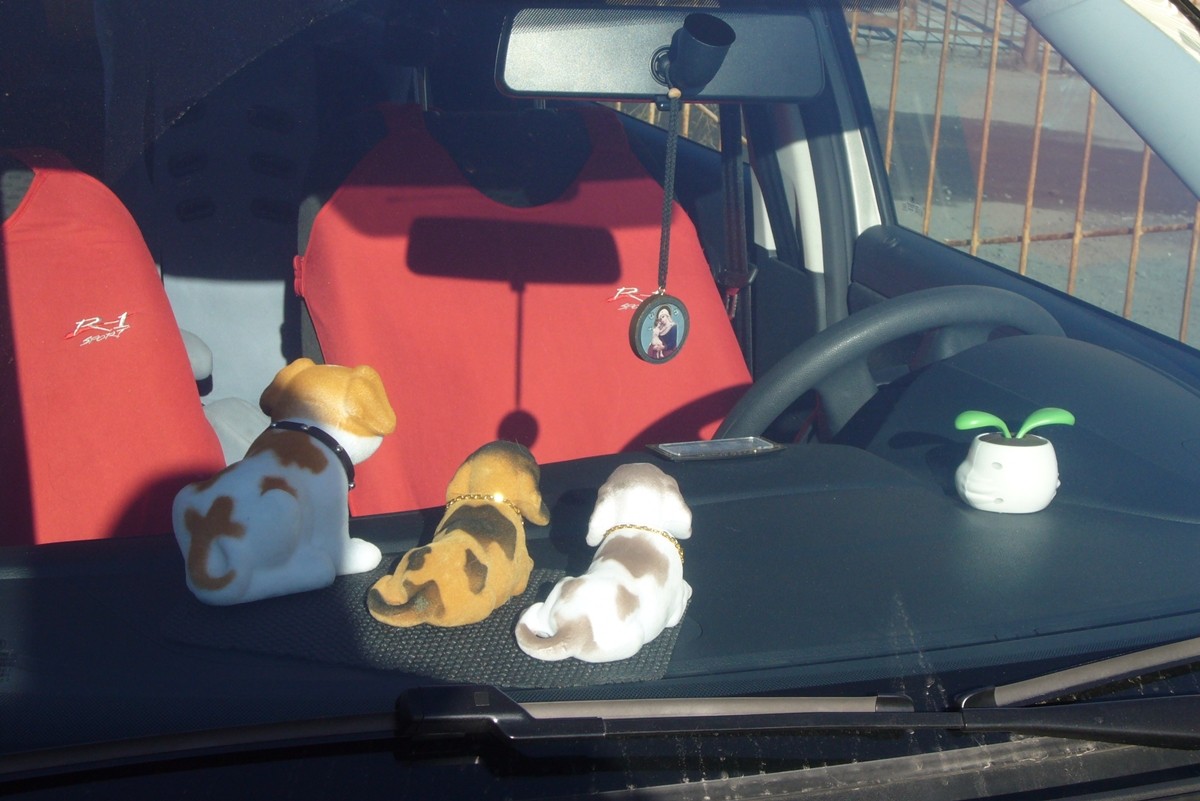 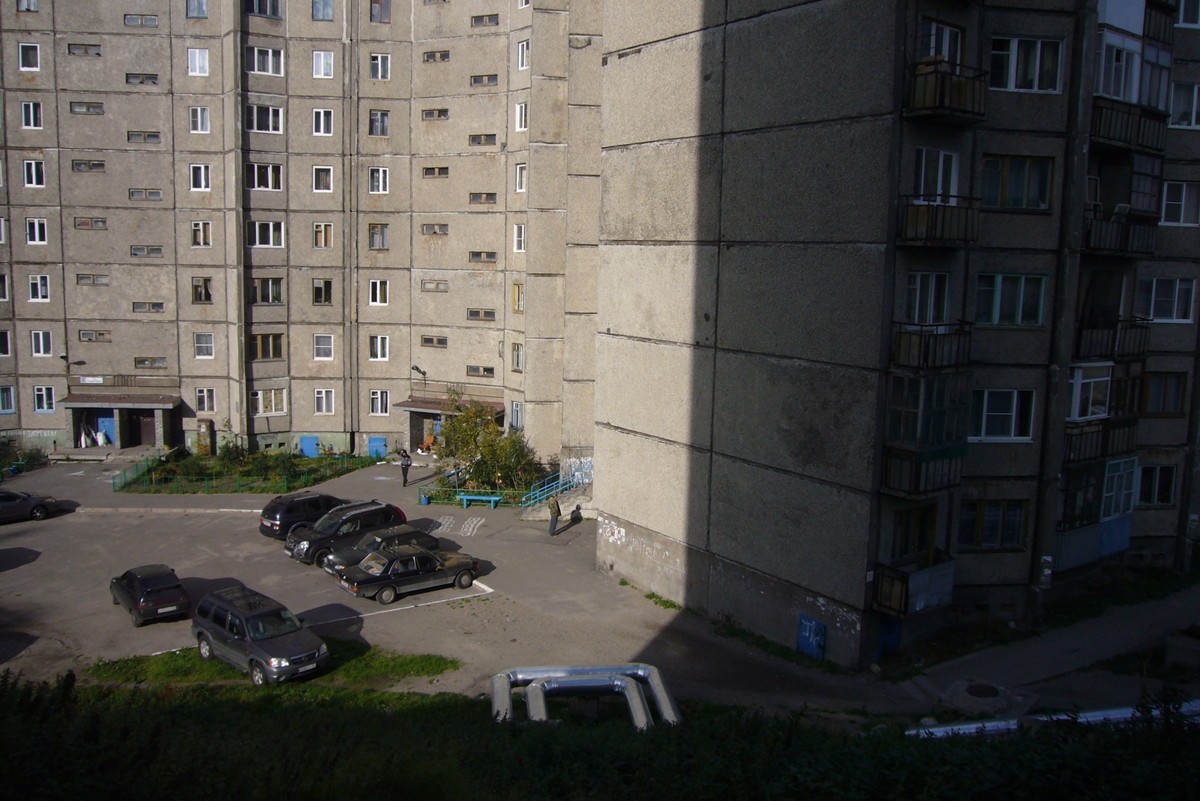 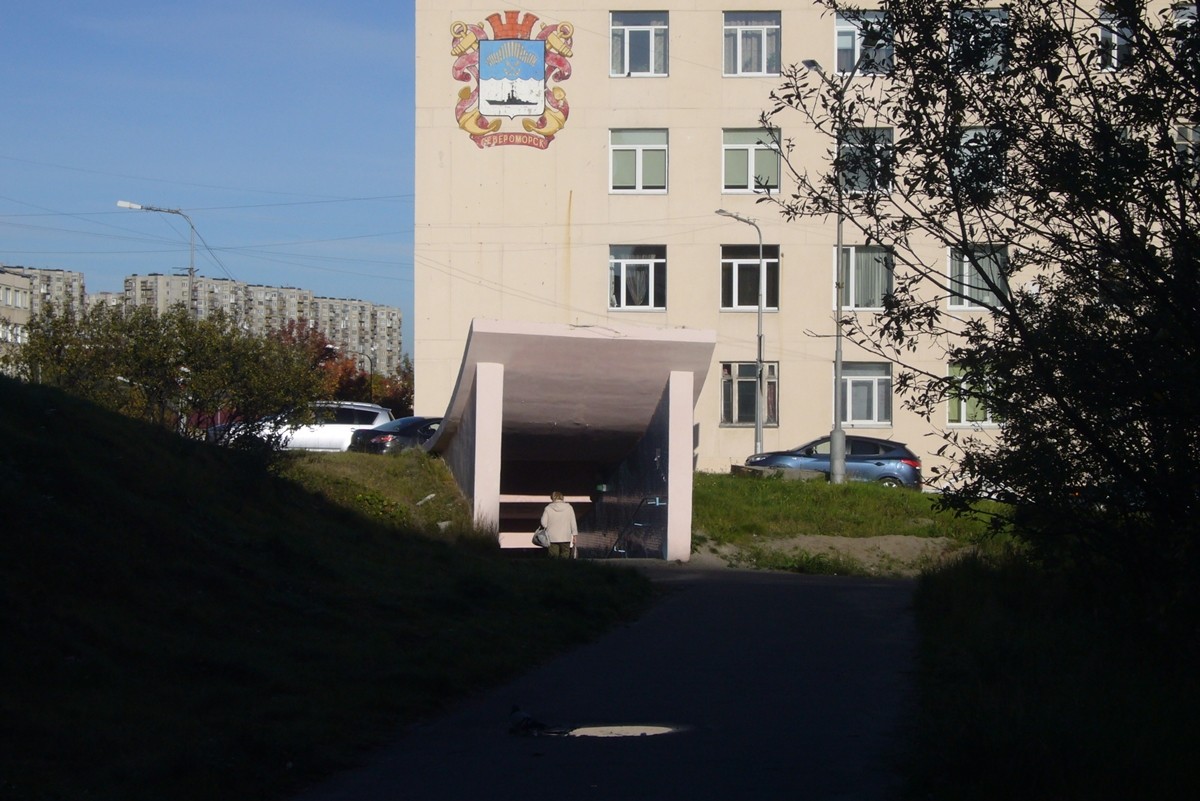 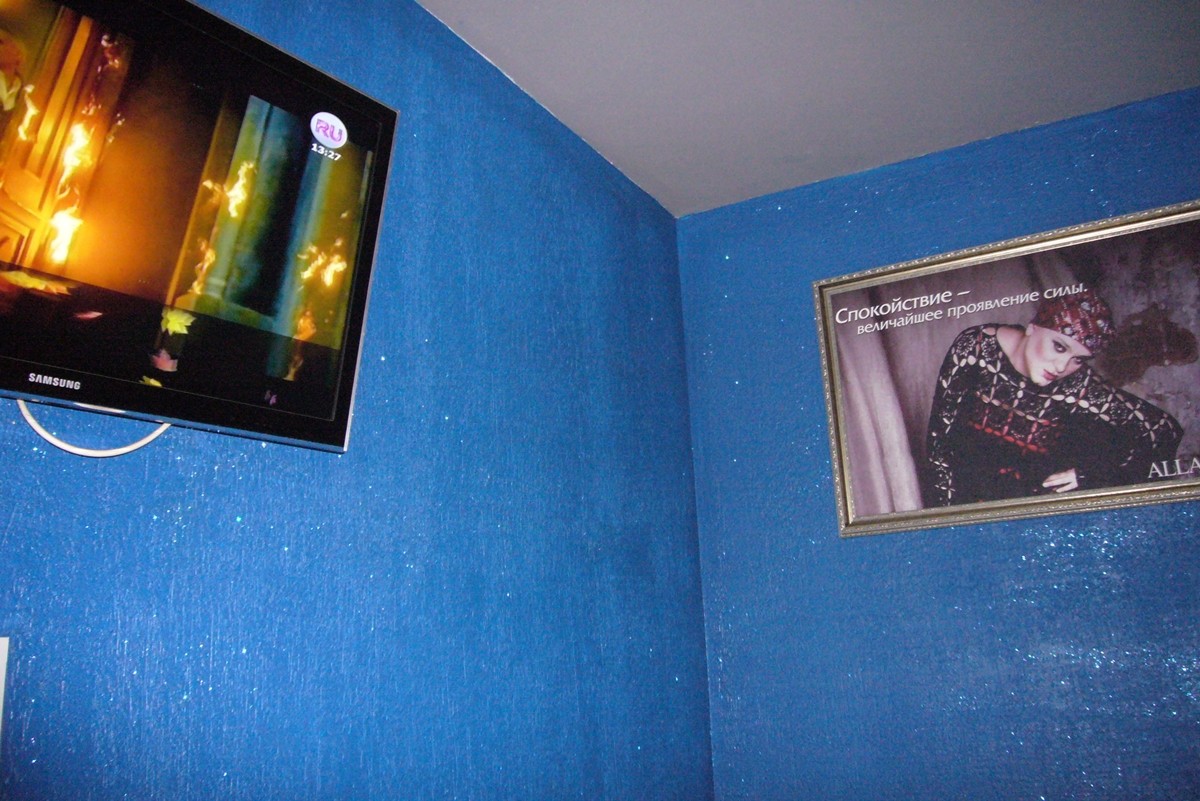 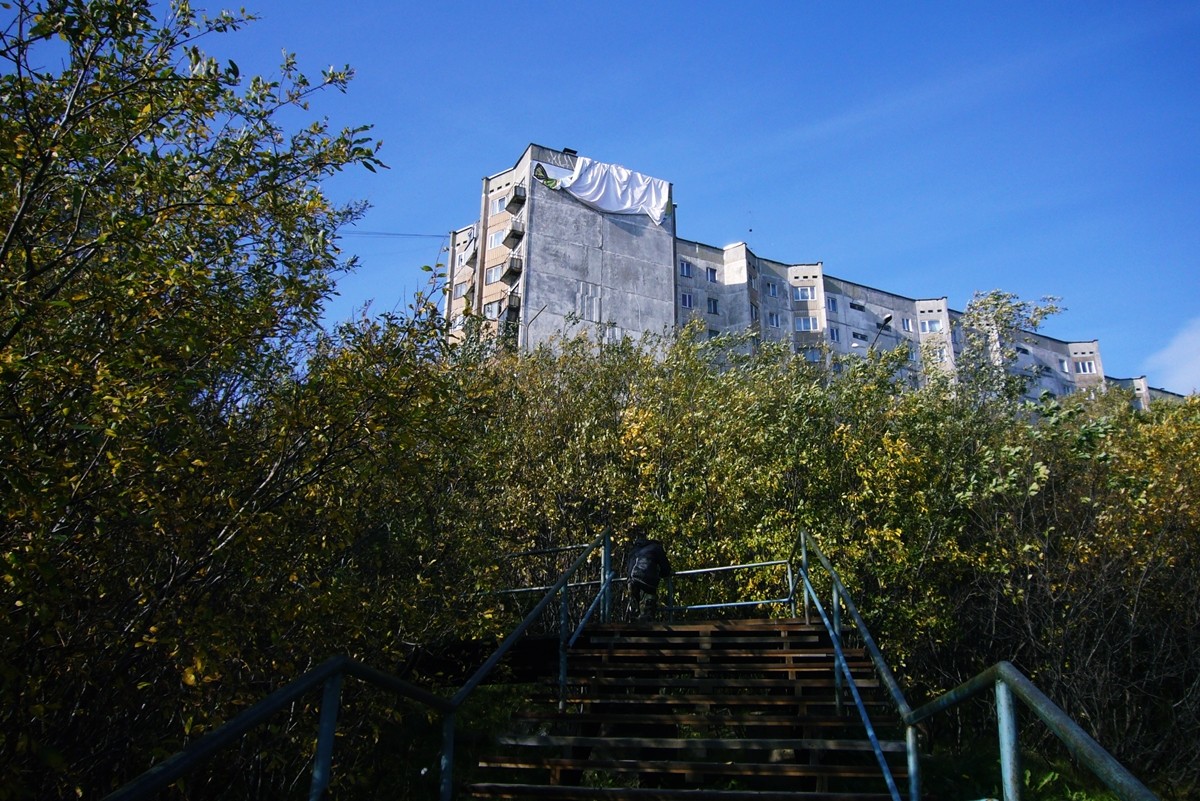 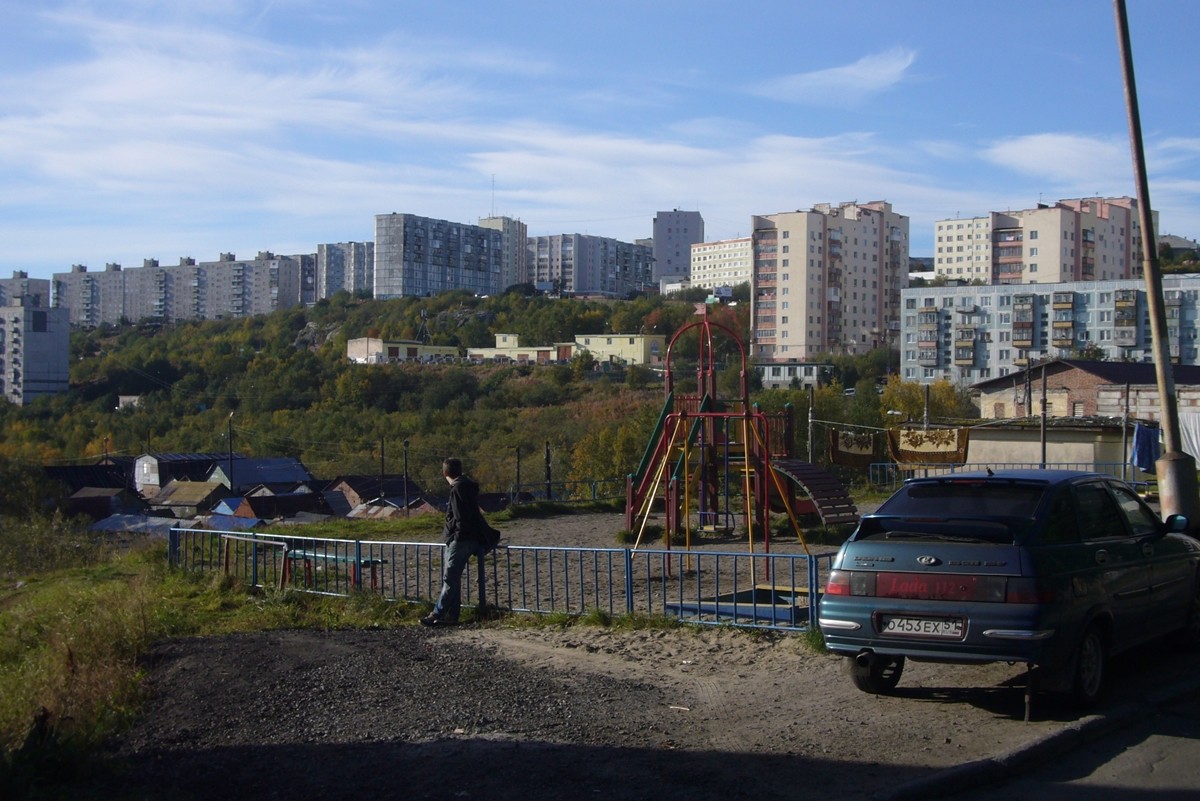 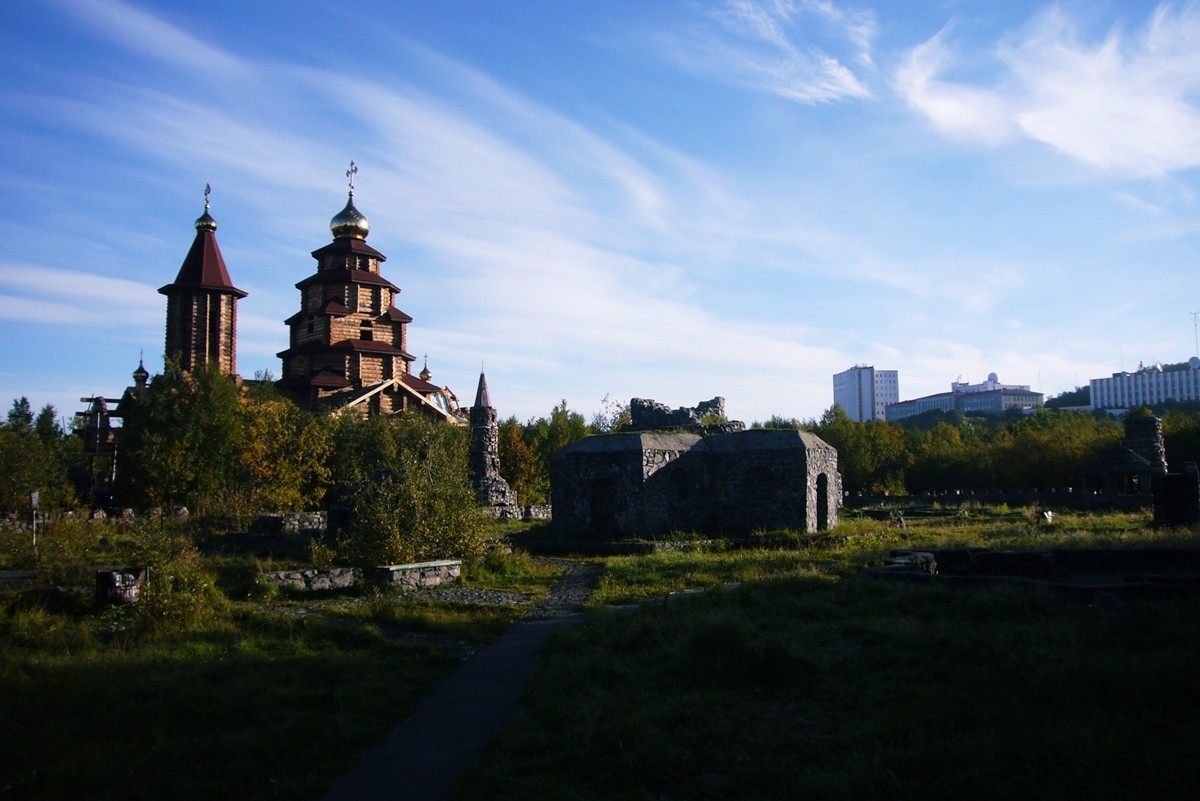 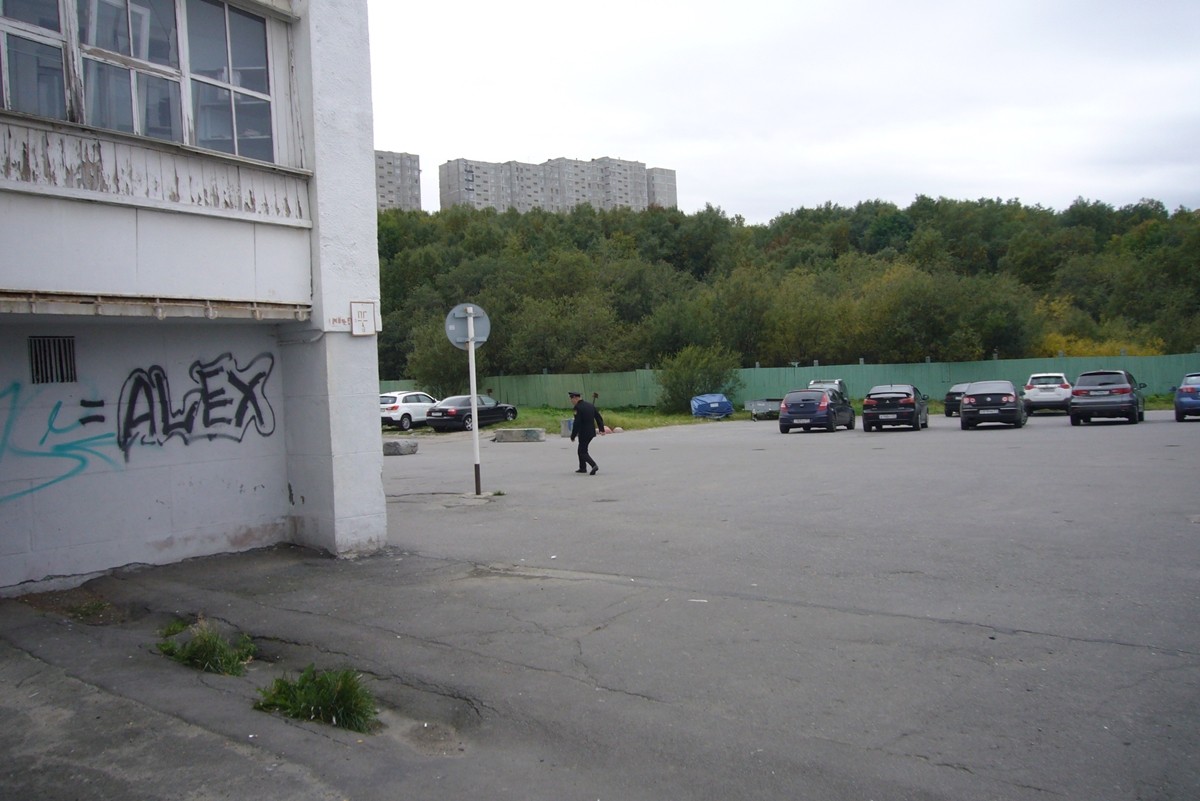 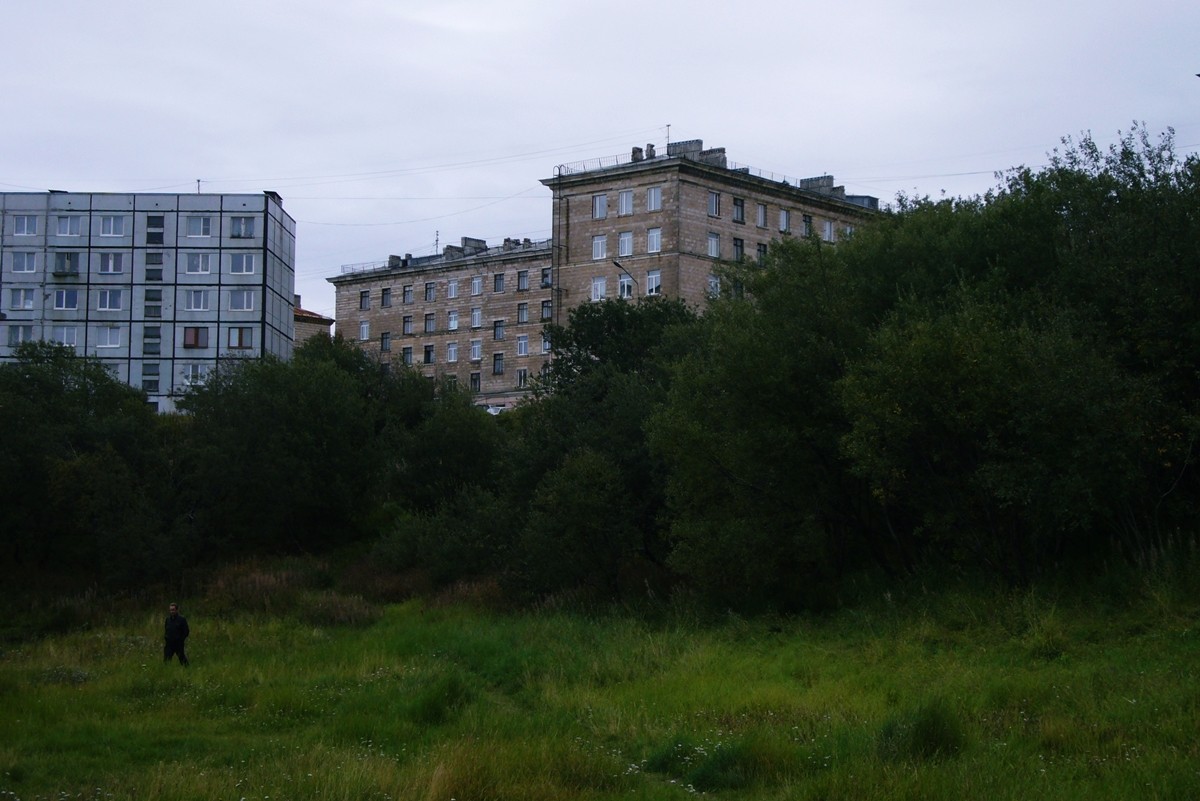 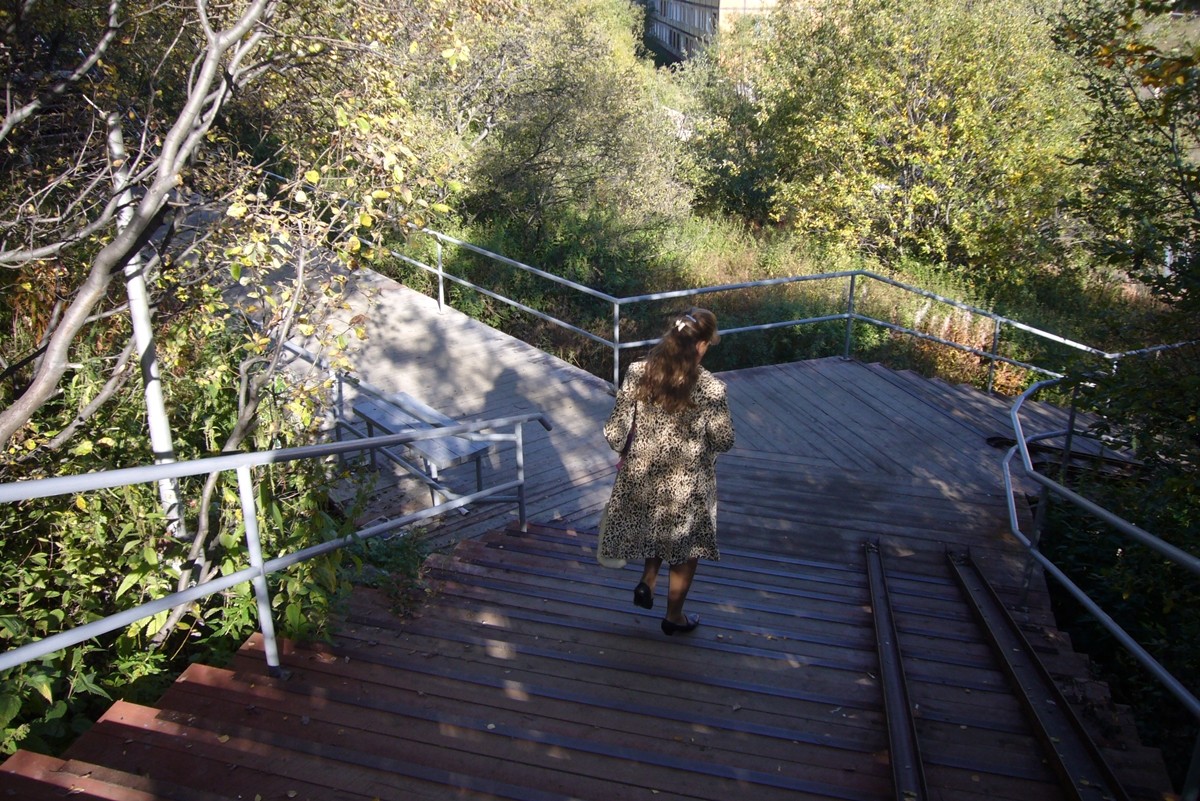 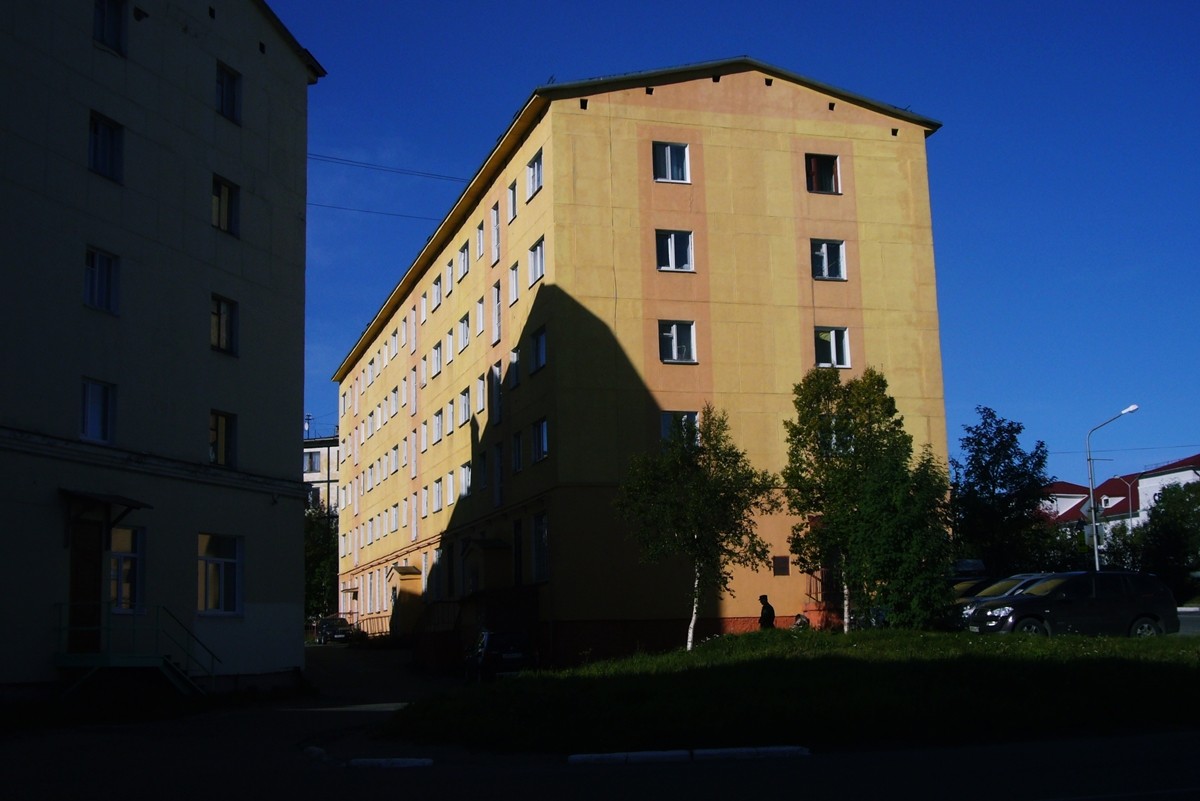 Taking boat from ship to the port (including inevitable fuss during loading and unloading), standing in line at the first ATM, only that takes an hour. Then a line in the grocery store (non-alcoholic, alcoholic and strong drinks), then visit a military exchange store (souvenirs, presents, etc.). After that – a stroll to the closest bar. Many don’t go past that point. And that’s a real shame.

Ascending higher up, you can see all kinds of war memorials scattered around the city – AA missile, gun turret, submarine, torpedo boat, APC and finally, a bomber, frozen on a pedestal above the town. Higher up, at the top, there is a town graveyard. Memorial plates are reaching to the sky, where most of these people have spent their lives: a majority of people buried here were military aviators. There are only lists of fallen and plain yet so poignant and accurate poems. 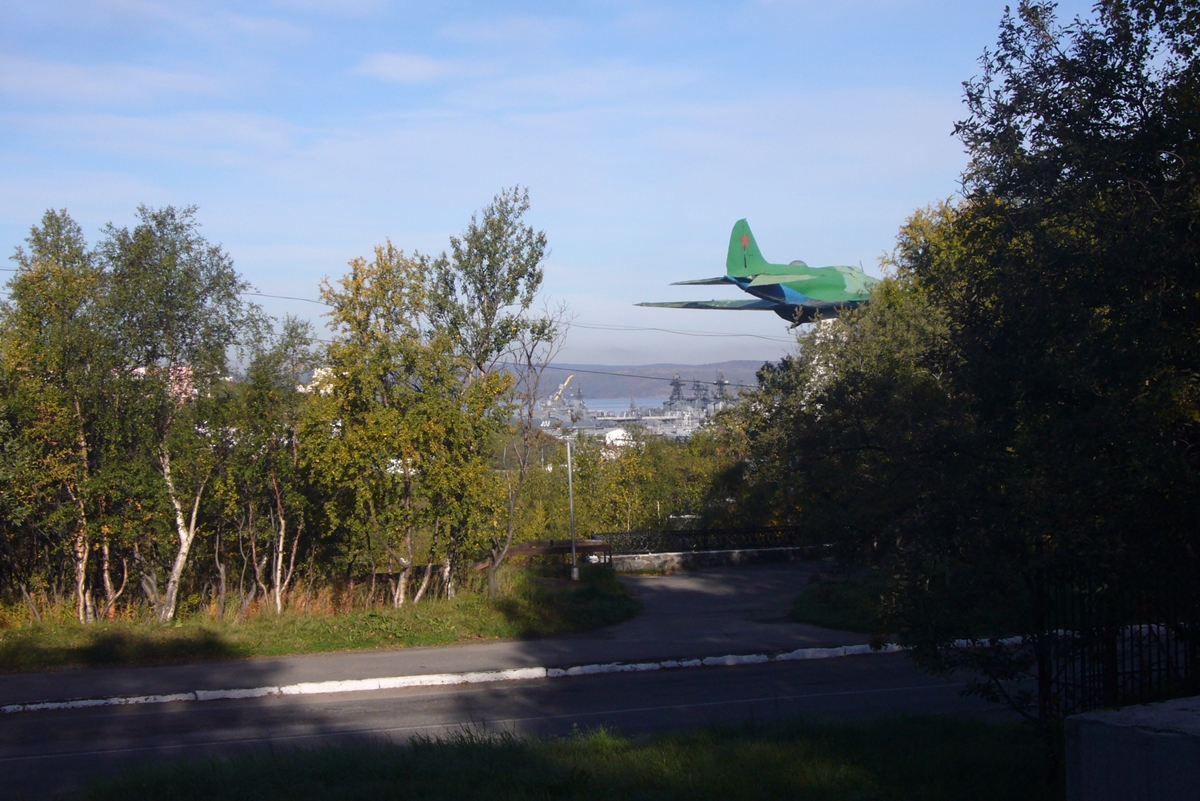 Mornings in Severomorsk are so quiet it hurts. From time to time this silence is disrupted by distant howling of fighter jets. Street cleaners scrape with their brooms, at this moments graveyard looks more like a park with its neat pathways, flowerbeds and decorative bushes. Some rare cars are passing by. Dog’s claws are clacking against the asphalt. Somewhere far away children are playing at the school playground. Clear autumn wind brings these sounds down to the bottom of the mountain, to the port, then to the bay. There it is taken by clucks and tarrocks further to the Barents sea. They scatter sounds shreds among islands and lighthouses. Kola bay can be seen from any point around here. At the very least, it’s the feeling you get, when seeing slowly passing corvettes and frigates in the openings between the buildings. Peculiar landscape enhances this town. You can get to the roof of the post office or bank just passing through the yard, without even knowing about it. After taking a turn around a corner of an apartment building, you find yourself by fenced steep fall. Down below you can see ruins of an old factory among the rocks. Its windows, that were not shattered yet, quiver from dogs’ barking. A little further there are cottages, covered with watery veil of furnace smoke. There are trees that look like crooked burnt matches, standing by narrow grey ledges. And above all that a sky, so low and blue, merging with the bay water, melding in it like ice and spreading like oil spots. 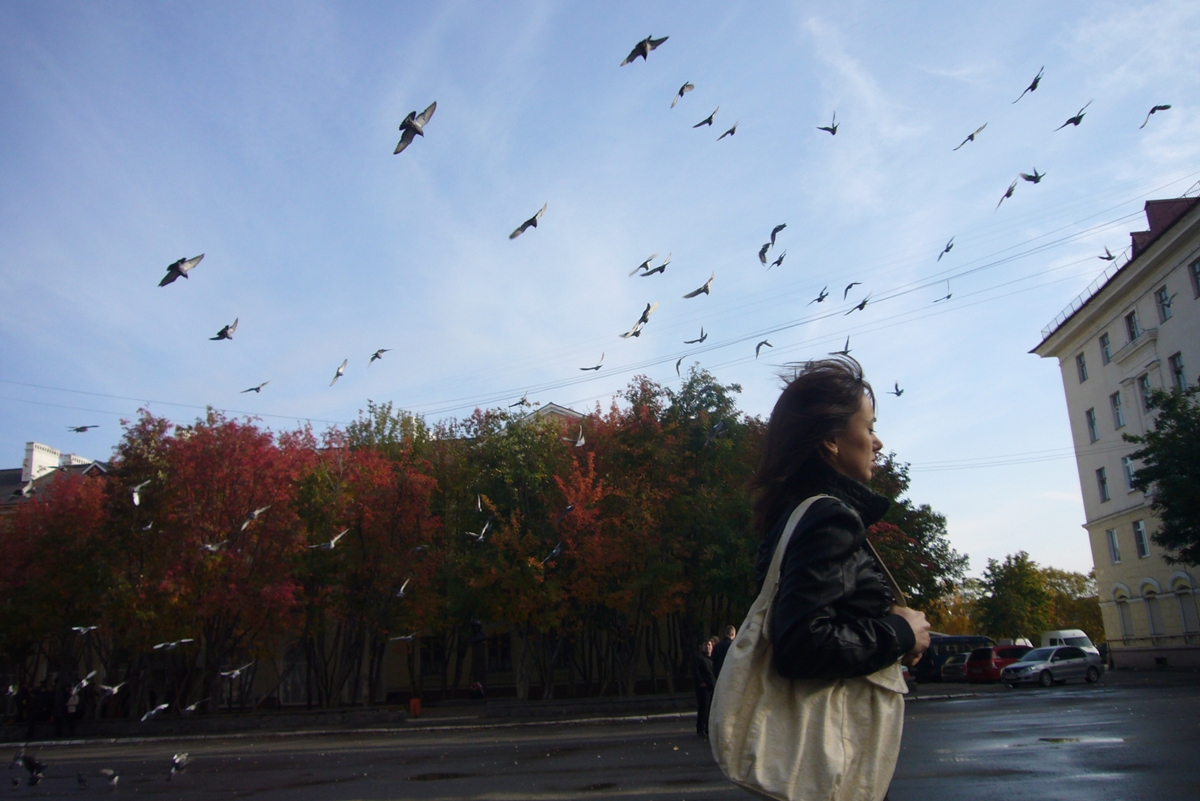 At our last shore leave we have witnessed a festival, the Brides Day. At the steps of Officer’s club, there was a Défilé of married women in their wedding dresses, with their design bizarreness level varying from ‘zebra’ to ‘leopard’. Their escort was waiting for them on the square. All of them were bikers, for some reason. Aged men in leather spiked jackets were zealously guarding their bikes, keeping bystanders with cameras as far away as possible.

-Do you have owner’s permission to film? – a giant biker aggressively asked a small man with a camera, who took an unbelievable pose in front of a bike.

– I do. I am form a newspaper, – he wheezed in reply, trying to keep his stance

Then the procession of brides, mounted on iron horses and on foot, started moving towards the seaport terminal. Some contests and stops were organized along the way, on squares and big crossroads. These were quite pure, considering depths on cleavages and cutouts on wedding dresses. Dropped out brides were taking a smoke in a small white packs.
Pigeons did not risk landing amidst that festival and were observing it from safety of the sky, circling above the horned helmets, knitted hats and veiled rosettes. Someone yelled ‘Kiss!’. Laughter, applauses, cry of a child, who couldn’t catch a pigeon. Ships buzzing down at the port.

In honor of our departure from Severomorsk, ship’s captain ordered everyone to celebrate. Ship’s speakers hoarsely roaring ‘Victory Day’ for ninth time in a row (I have to note that it was not a canonical Leschenko record too). Upper deck fully illuminated, bright as day. Sailors, engineers, mechanics, electricians, pilots, instructors, cooks, coordinators and interpreters alike, drunk and happy, were wandering around the flight deck, looking for a spot to take a picture.

The only place this reckless festivity cannot reach is here, Deck 6. Even though it turned out it is above water, no rolling or anything else can be felt down here.