A few winter days in the town of Sokol.

The darkness of the sky becomes denser closer to the horizon, and if not for snow, it would be impossible to actually see where the sky and where the land are. Snow reflects the light of the moon behind the clouds. Blurred dirty-yellow spot. Street village with fences and dogs at the foot of five-story houses. People dragged themselves through ill-trodden paths, heaped with snow and not cleaned at all. Carefully walking, rocking, choosing where to put their feet to the next step. One can look back and see the same as in front. Exactly the same street with dark trees and cores of cars near fences. Look back and see the same life, which will continue on and on. 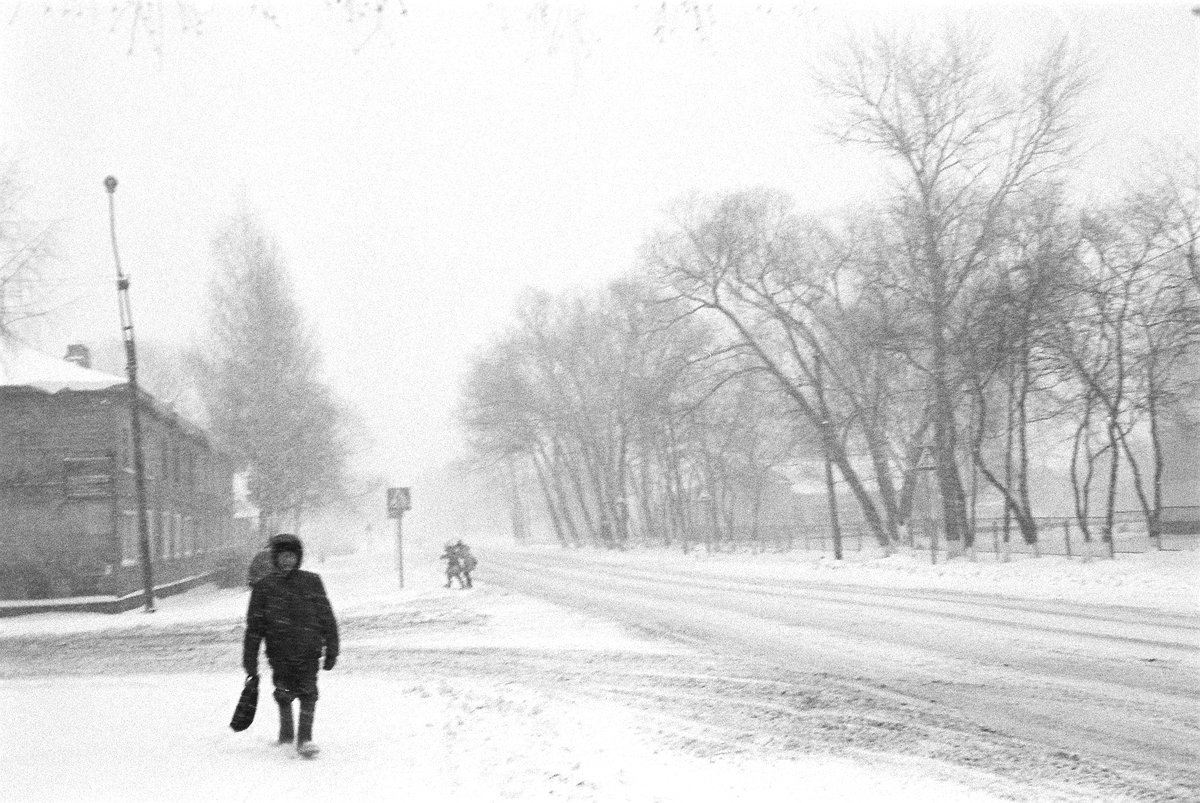 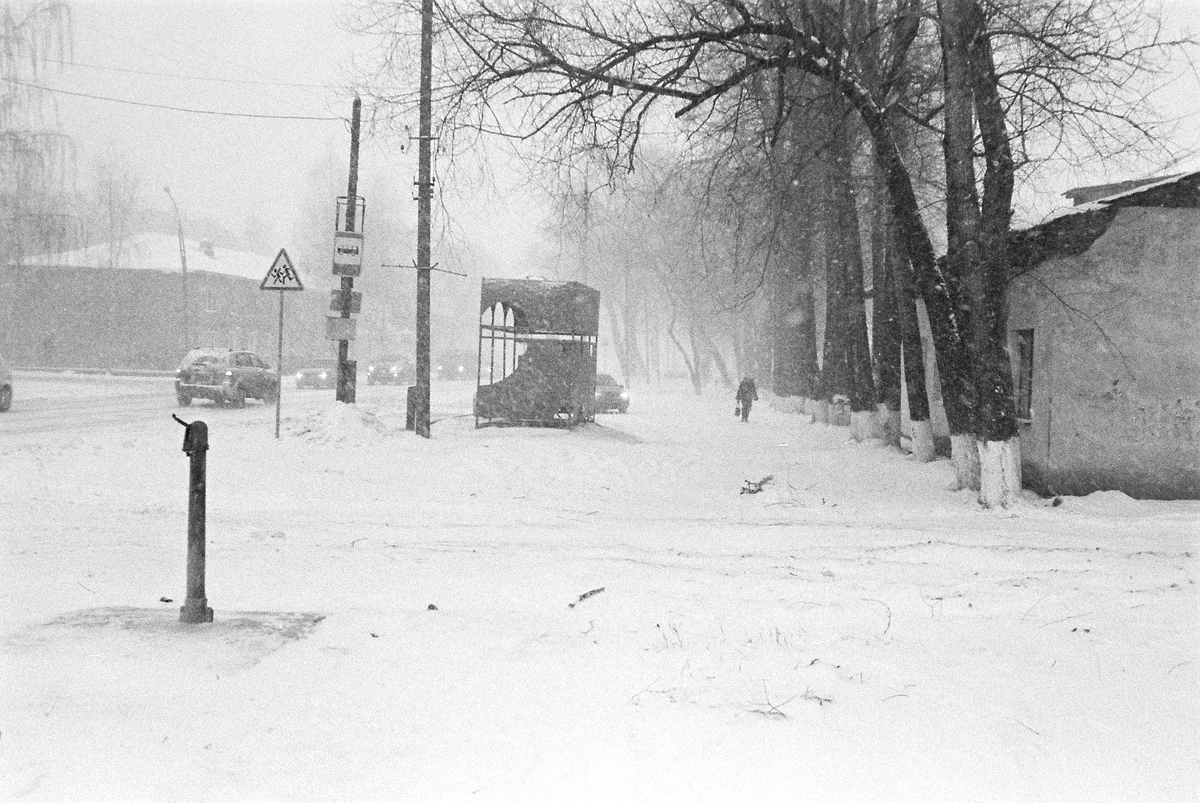 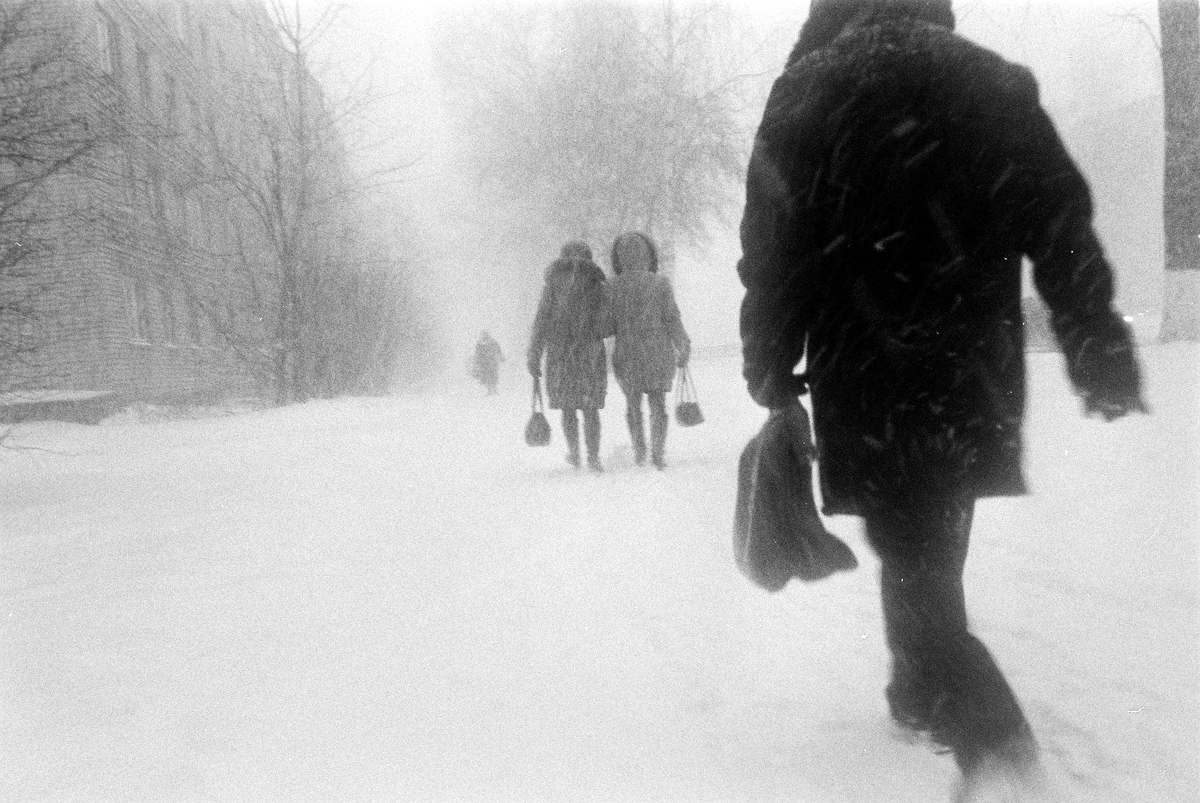 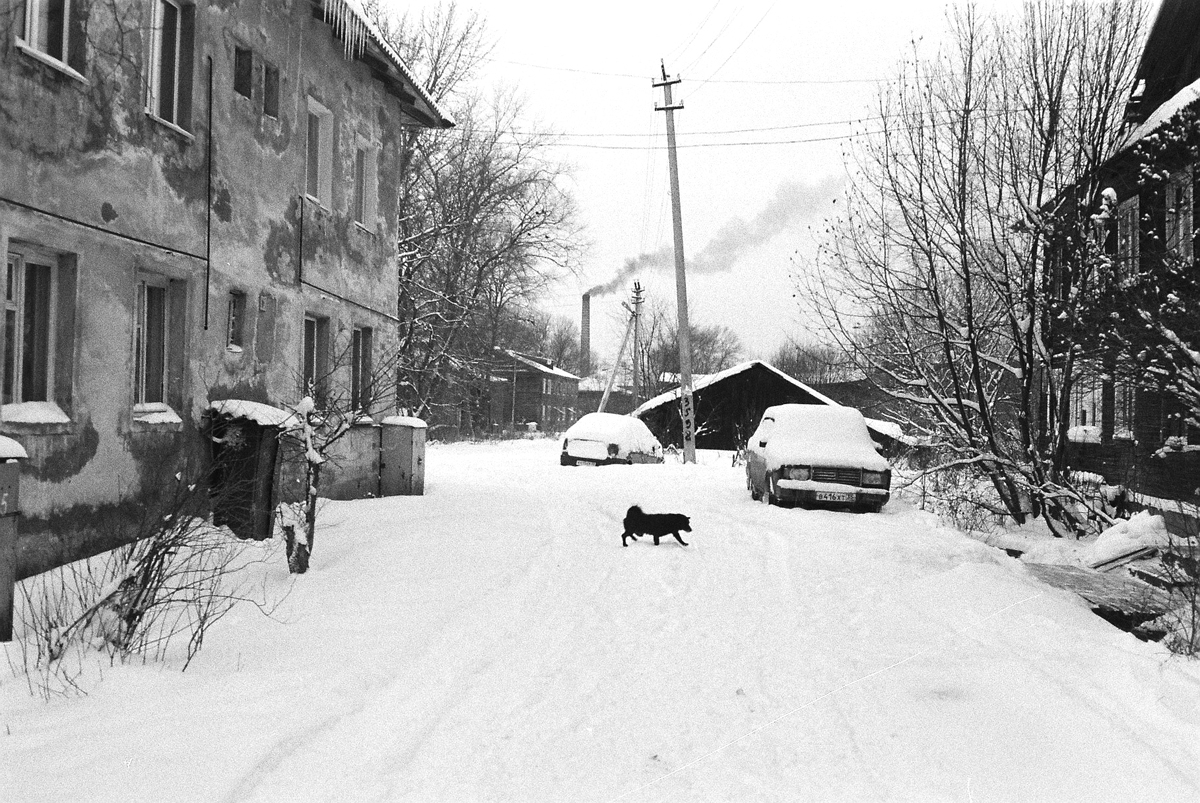 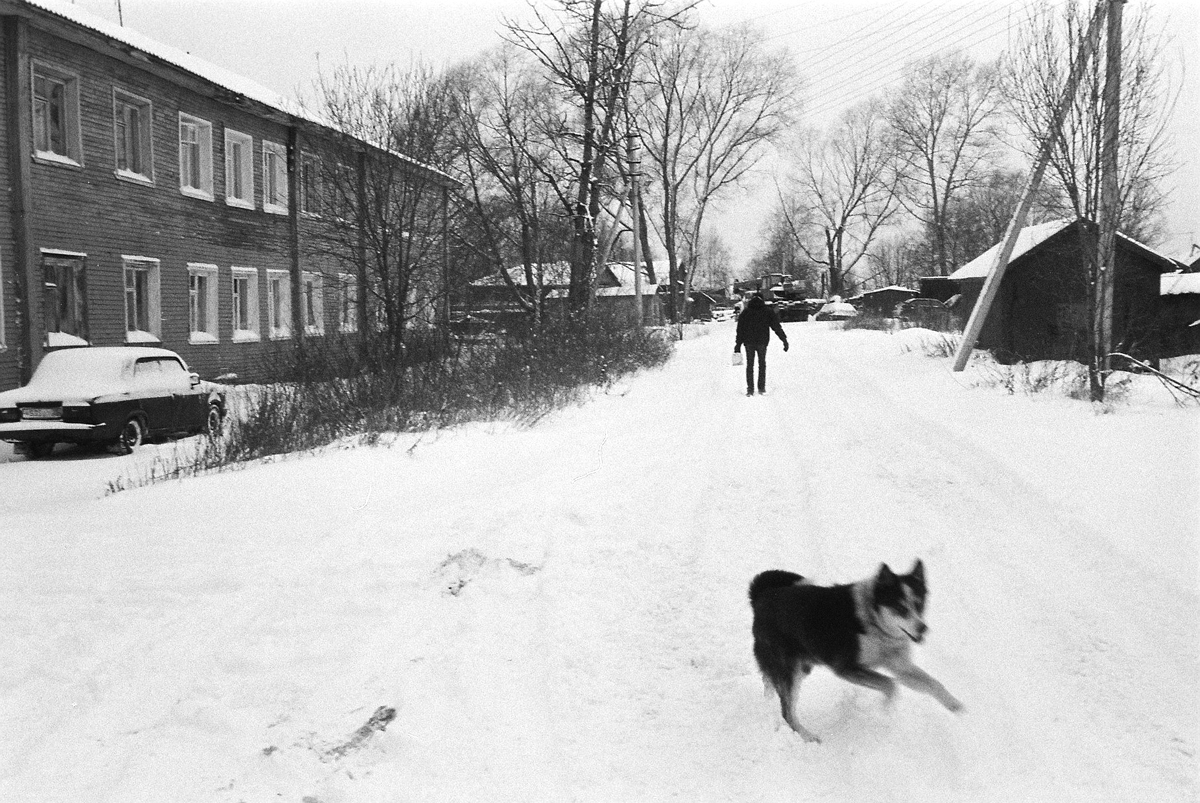 Director of the plant. “I do not give interviews and talk to you just because you come from far.” . Small cabinet. Bare wall behind the director’s chair. Computer and small photo of a young person under the glass on the table. Maybe it is him 30 years ago. Neat gray suit and dark tie. Wavy hair with gray twists into a do which was fashionable a couple of generations ago. Now there is no chance to straighten it out. He speaks slowly, choosing his words carefully, but without interest whether he was understood correctly. He works at the factory beginning from 1974, works as the director for 3 months. While parting shakes hands firmly and slightly bows. On the stairs in the office building the dogs are trying to get warm on gray worn steps. Out of the half-empty building the old furniture is taken.

City administration. Broken steps, covered in snow. The guard at the entrance, which does not look up from the crossword. Canteen on the ground floor with the aluminum forks and cheap tasty food. People with documents in hands are waiting near cabinets. Female staff – all in high heels and jewelry. Gorgeous with soft beauty secretaries in the receptions. Brightly made up, youthy heads of departments full of its own importance walk the corridors. First deputy head – a young man in a nice suit. Local Medvedev: as I walked from floor to floor, he found and studied my facebook account. Does not make any decisions and accompanies to the head, after calling him. Head of the city – a graying middle-aged man in fashionable knotted scarf. Was going to leave. Stays and sits at the head of the table. Speaks quickly, referring to the various figures. “It’s hard, but we managed to work … We have accomplished a lot… Unemployment rates and rates for heating for the population decline … The city budget for a couple of years is without grants… The consolidation of power … I always say, the power is like a human body – it is possible to live without a liver, but without the circulatory system, which connects everything, one can not live … But the problems … People leave the town and leave the problems here … Kindergartens, the elderly, etc.” In parting he invited me to come and share the view from the other side. Outside the window blizzard begins. 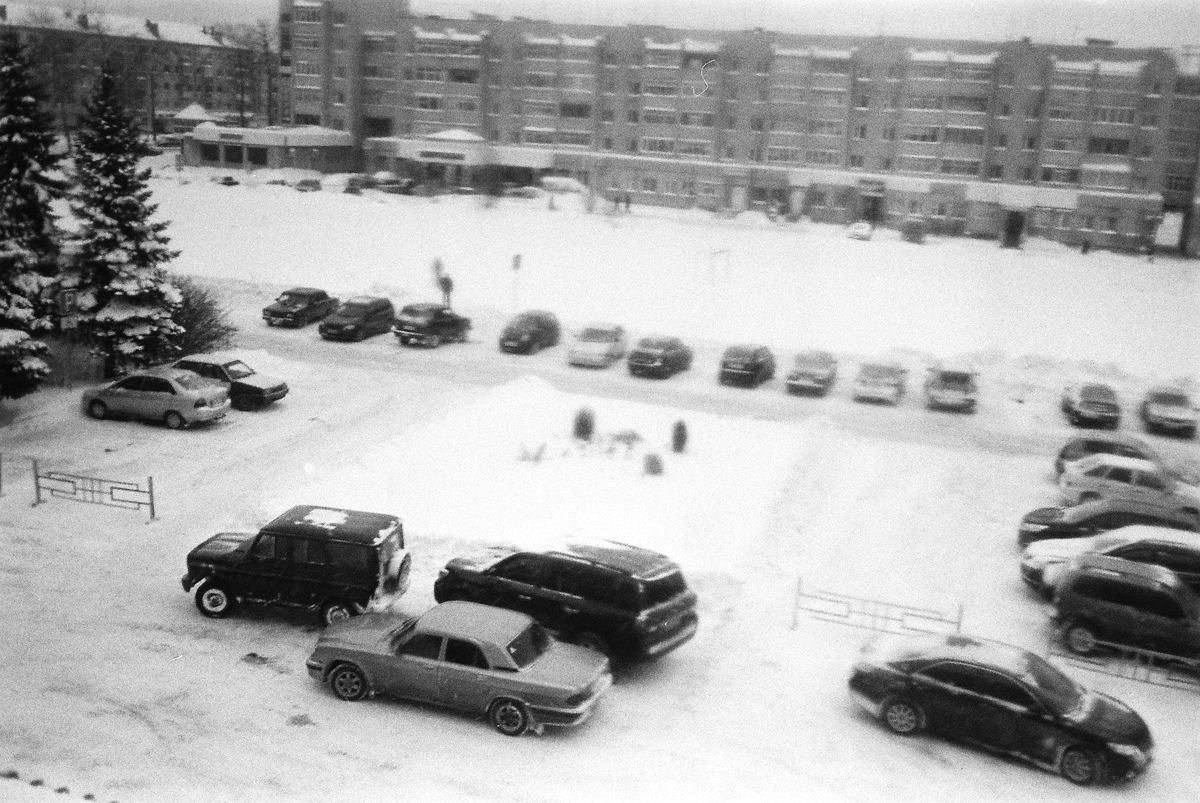 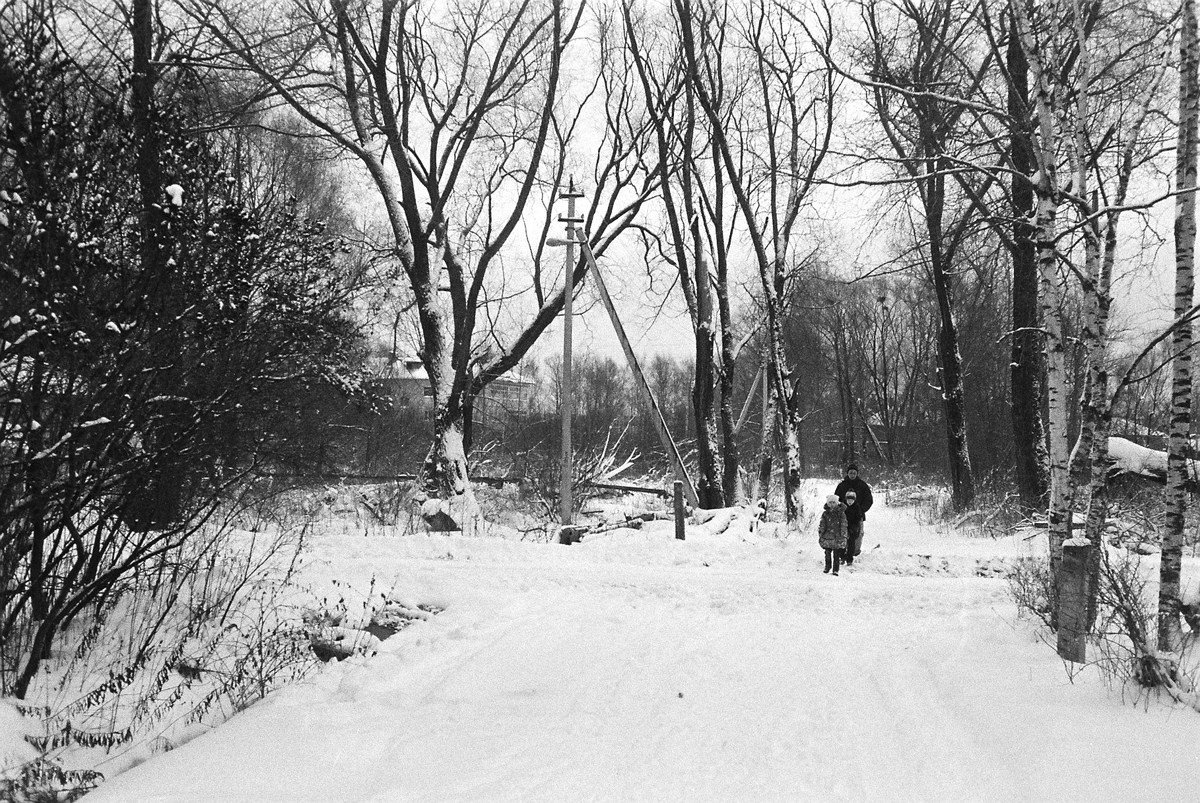 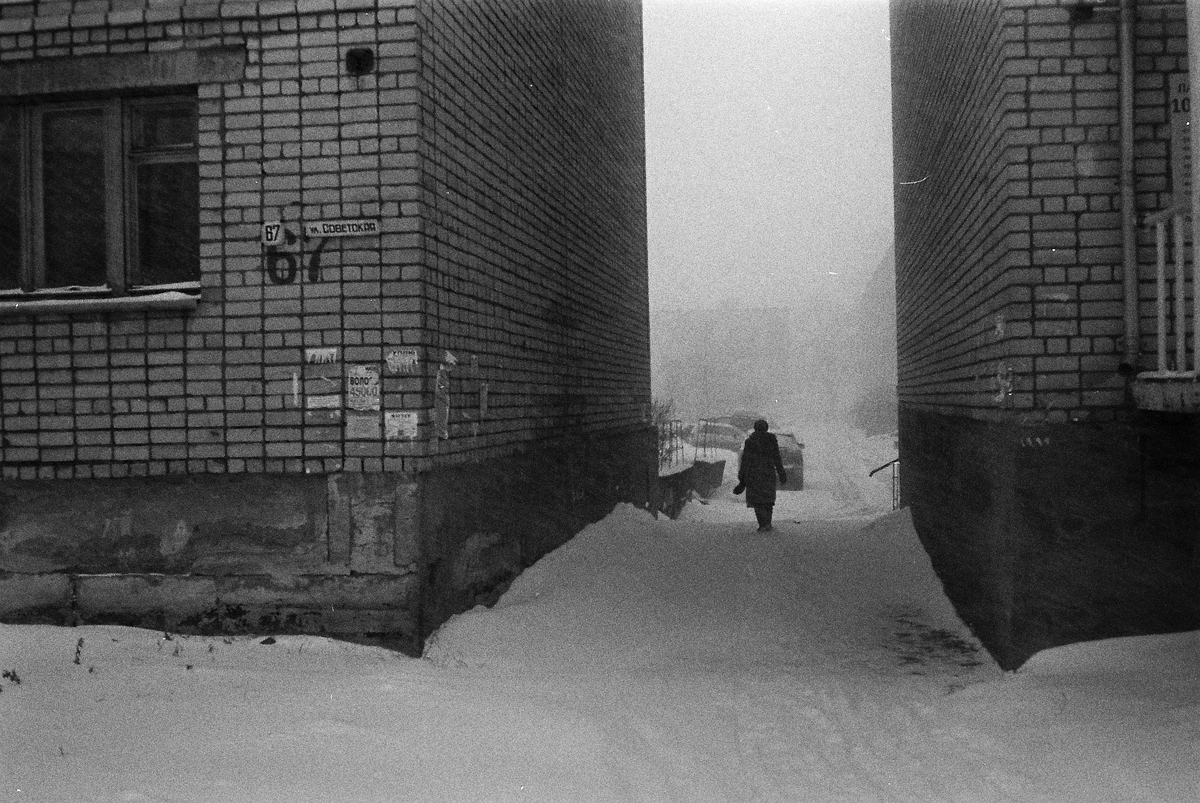 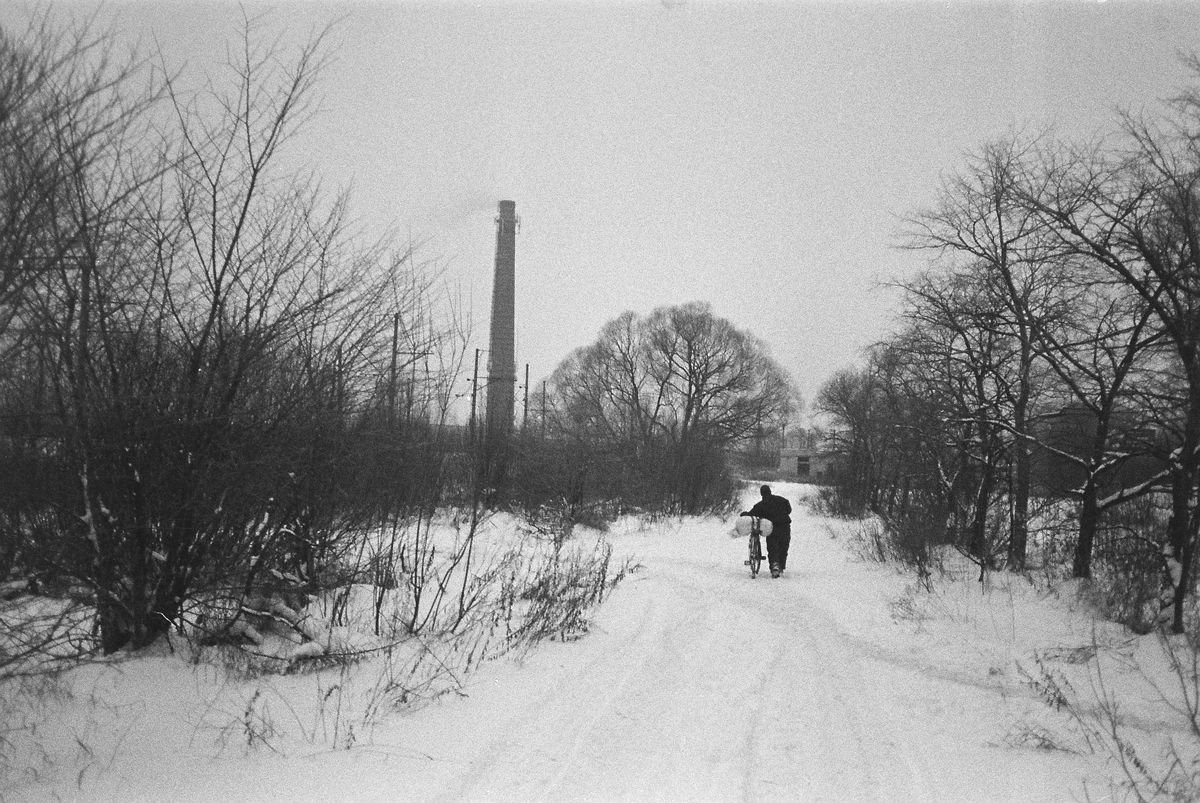 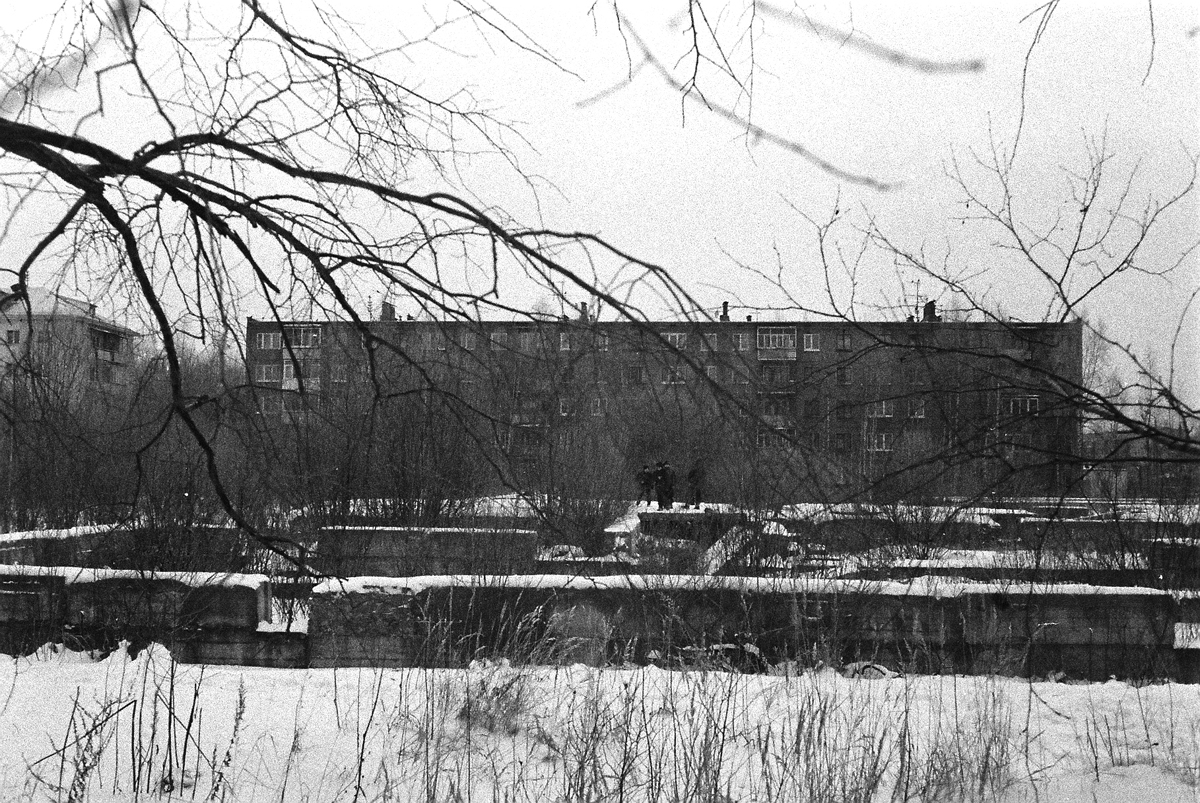 The road littered by snow goes down to the river. Right behind a concrete wall there is a woodworking enterprise. On a stepped ziggurat of a shop different dates from 1955 to 1973 are lined with bricks. Left dilapidated, but still residential two-store houses are shrouded in smoke. Smoke smells like a rustic bath. Behind the houses and sheds there is a slender water tower of white brick. Meeting passerby, who asks a cigarette, and then for money. “Yesterday was birthday but daughter did not come. I’m 47 years old. Am I looking like an old man?” — he asks me. Right eye is covered by gray film. “Thirty years I’ve been living here, there’s my hostel”, — shows towards a blizzard. «You know, sometimes a river flowing in the opposite direction. A week per year. When I came here, did not believe it too. Made a bet for a case of vodka and lost.». Explains how this happens. «Check the internet». We both look in the direction of a frozen river and say goodbye. Then he catches up with me and asks me to add a little more money. Frozen fingers loosely holding the bills. 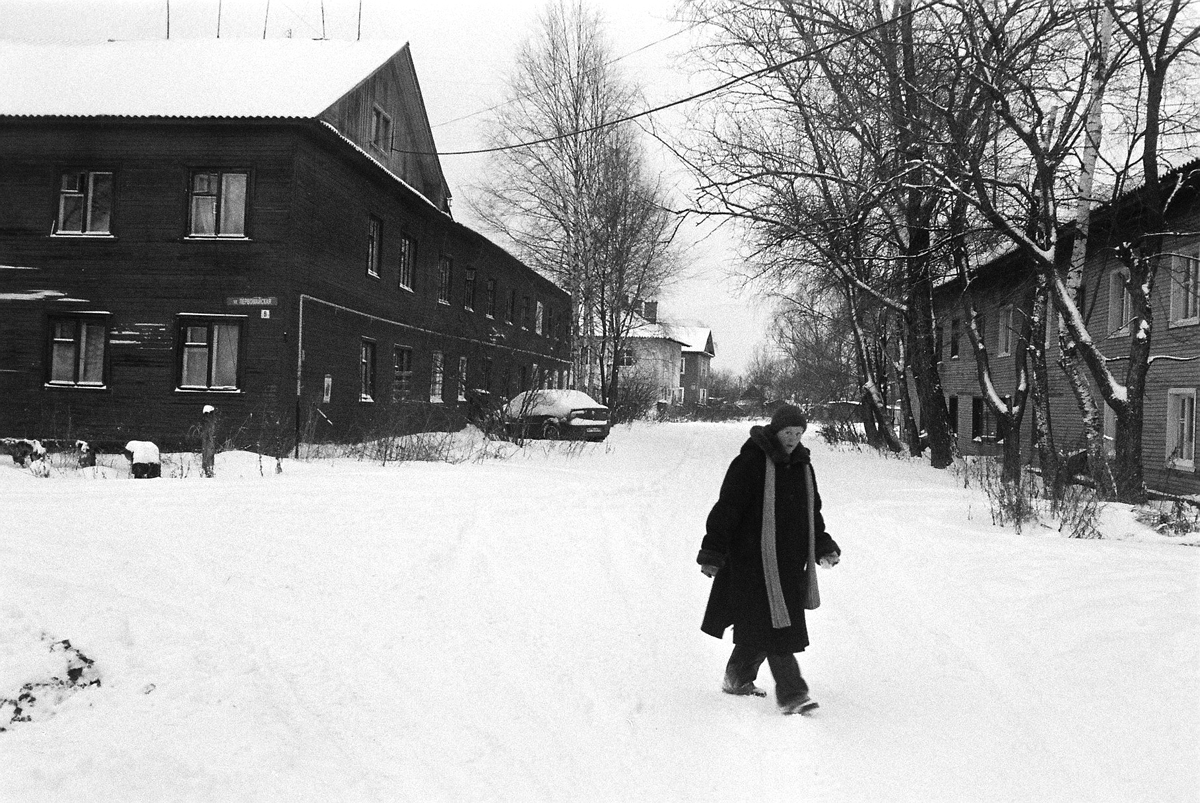 Black “Volga” administration car and woman in astrakhan coat in the backseat. Boldly outrun the cars which emerge from the snow haze. The driver, a young short-haired guy, put on some rhythmic music and glances disapprovingly at my shoes covered with the snow. We are going to the honored coach in cross country skiing. In sport school there is no electricity. Not large chippy coach, not paying attention to it, studies with the younger group. Children’s silhouettes in the gloom. Then go out to the blinding light. To the ski-track. Woman in a astrakhan coat is a little embarrassed that the coach misspeaks, but he quickly corrects himself. All life on this ski-track. Tells us that in the summer they train on the road, covered with sawdust. Woman hurries. On the way back, she says that once upon a time she was engaged in skiing. 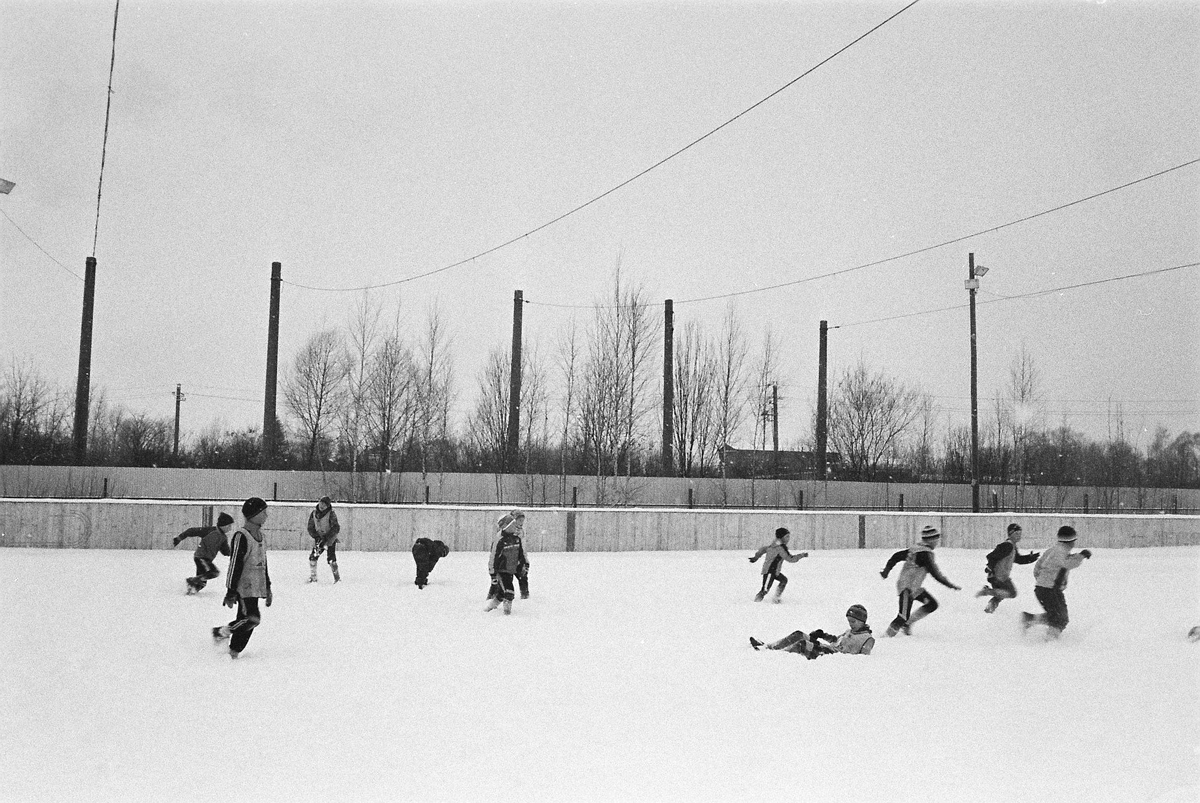 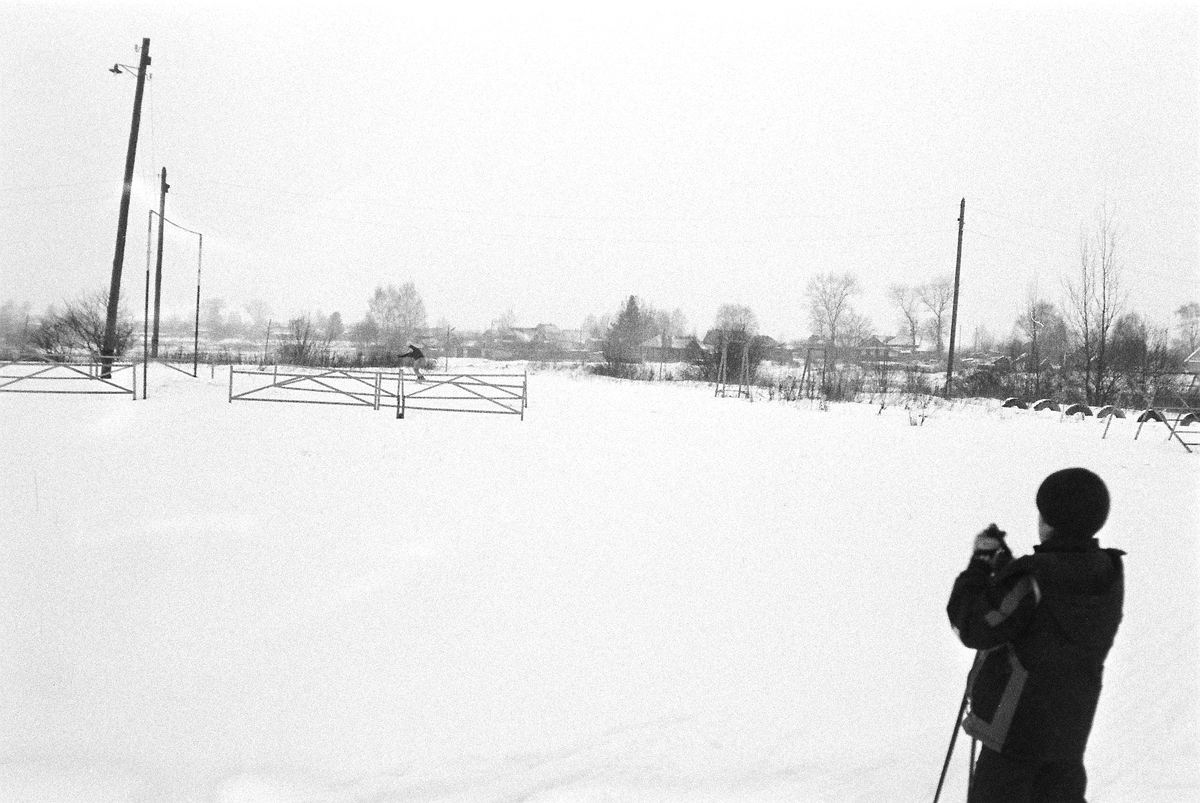 Cabinet of sports school director. Certificates and trophies. Tea with the candy that feels somehow sad. Director in a dark three-piece suit says softly talks about his plans. Grayish intellectual. A skater in the past. He says he can not afford to train young people because of the salary which is 8-9 thousand rubles. The people who are left have nothing to fear. He is speaking quietly and in resigned manner. The study quickly enters one of these – wrestling coach. Lean, like all fighters, short and very agile, although rather elderly. He speaks in a hoarse voice in the classroom and is inviting me to see the old gym, where students study before moving to a new one. Homemade welded and assembled from different iron trash simulators. Stitched mats. A small room for a short man. The certificates again. On the ragged walls there are posters of wrestlers. He brings the album with old photos where he is still a boy, the most frail in the line, then a young man in wrestling tights. The same smile and strong muscles. He give comments to the neatly pasted images: “This was a good athlete, this – I do not know whether he is still alive. Here you can see me grappling. You see, I won. But was cheated of my victory. Opponent and the referee were from one city.» Director is smiling. 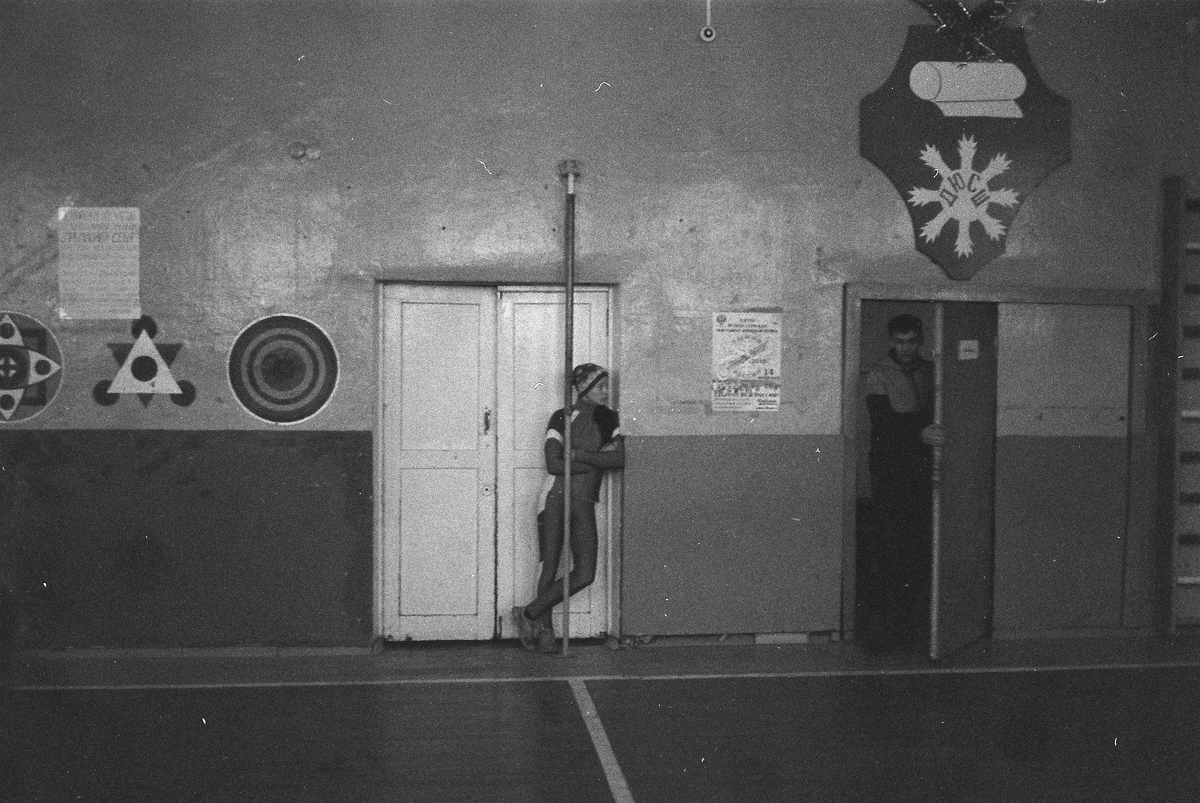 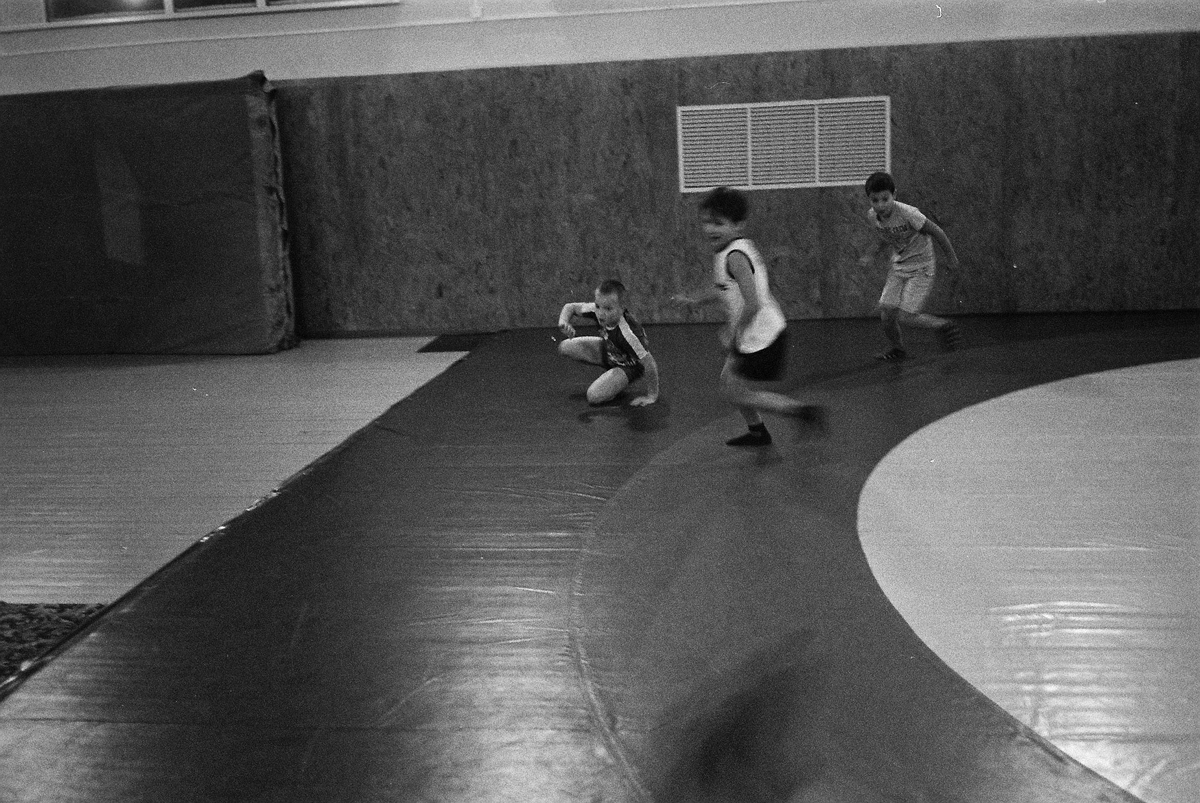 Stone falcon at the entrance to the bridge holding in its talons a heavy roll of paper. To him on the narrow trail comes a man with a bicycle. Old soviet bicycle, with a bundle which is tied to the trunk, is stuck in the deep snow. Man, sweaty with the effort, with disheveled scarf, stubbornly pushes his bicycle along a narrow path. Adjusts his old knitted hat and looks around. Here, it seems, often lead bikes by the handlebar, as if a gallant cyclist accompanied a lady, but there are no ladies. Snow sticks to the spokes and tires.

On the square in front of the school of arts the Christmas tree is put. The real Christmas tree and in the darkness one can imagine that it is a real one and very fluffy. School building – as a textbook on the history of architecture: blackened wooden right-hand side, which seems to be the beginning of all. Strict central stone part with a balcony for performances. And accounting, from the 80s, made from bricks. Inside, in the artist’s studio, there’s complete bedlam. Troubled teen and a few girls. The teacher pays no attention to it all. 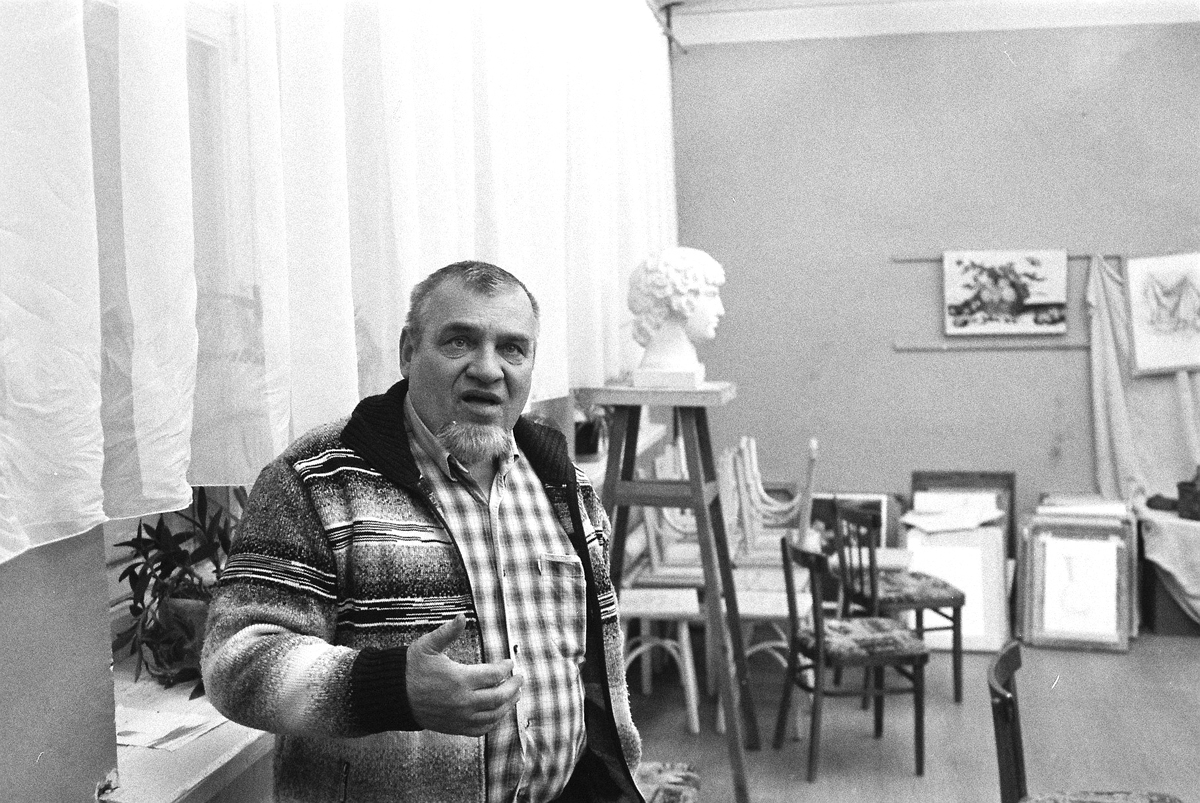 The artist, short stout man, is very proud of his own children. Tells me that he goes hunting for hares on the bike. 10 km from the city. In the next study the director gives the lesson. Fair-haired boy with glasses carefully stretches the accordion. Director speaks with the student as with the fully grown up adult. As well as a student, director looks myopically and plays the accordion emotionally. He hold the position of director for a long time, although he looks young. A woman his age in the next room with the same deep feeling reads by memory Eugene Onegin — this is the lesson of musical literature. Cute Vologda dialect on the background of arias from old tape recorder. 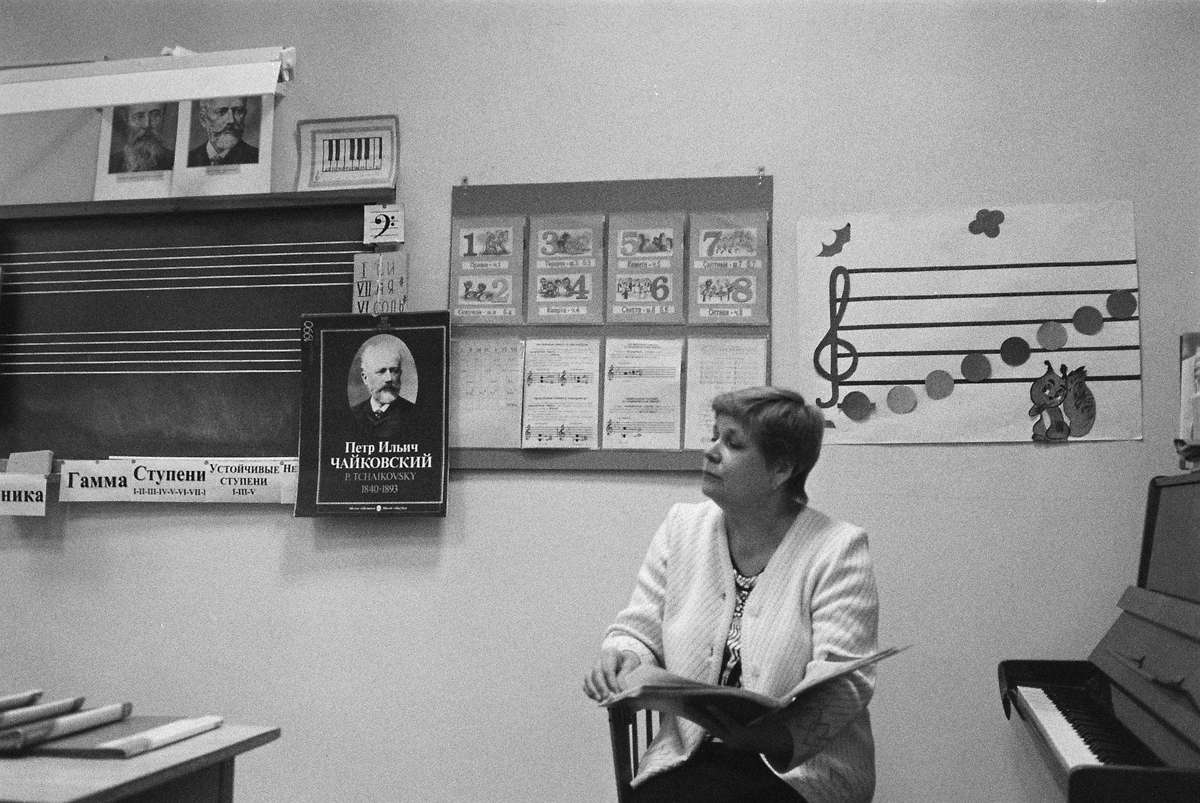 The snow had stopped. Lonely residents dig up their homes. Hearing the word “one-factory town” some start swearing. Street of wooden houses built “before or after the war.” Some houses have the chimneys. Snow cats bask on the heating pipes. Narrow paths to columns and statues of Lenin and heroes killed in the war. Junior high school students are coming home from school. There is a posting at the stop: “you will hear in our fancy dancing club the disco number which is still extremely popular in Europe.” Dogs romp in the snow. 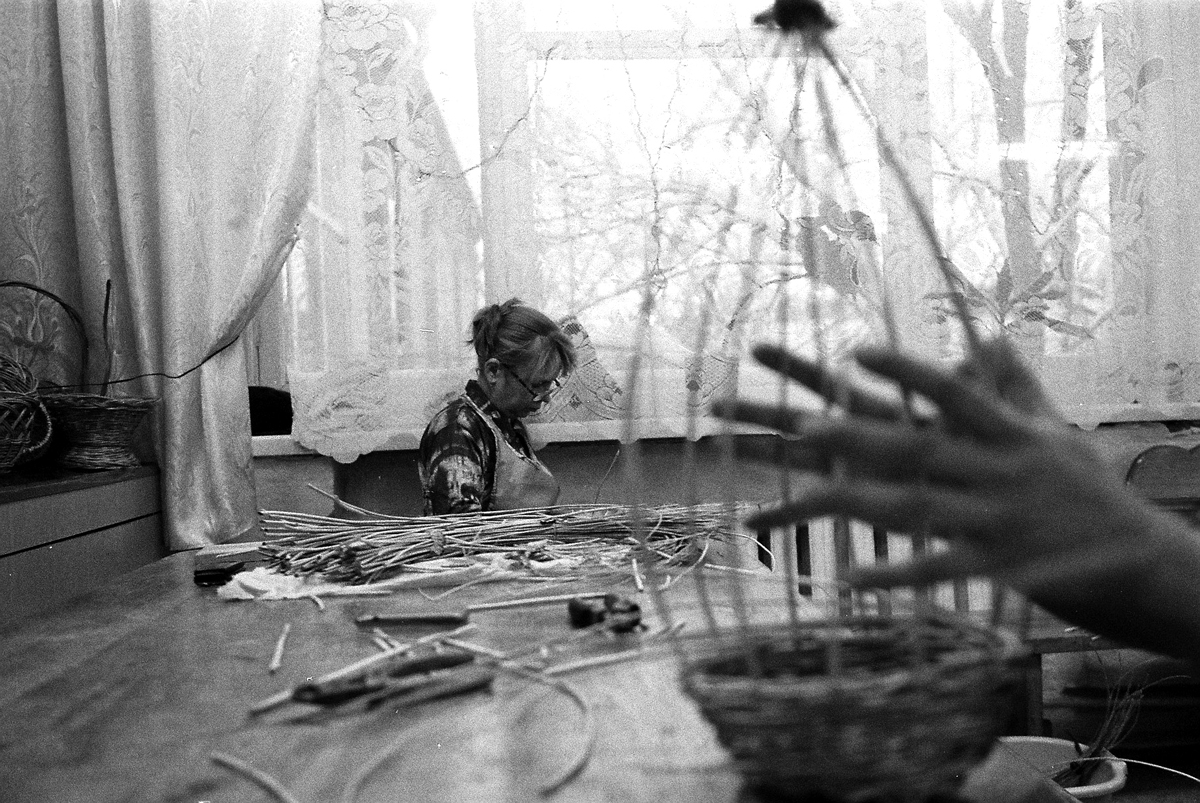 Spacious room in a recreation centre. Small brass band plays old waltzes and polkas. Soviet repertoire mixed with the music of VIA 80s. Puny bass has a very poor eye-sight and runs his eyes over the notes. Glasses with huge lenses do not help, helps the drummer – he turns the pages with notes. Elderly man with a bald head and long hair on the nape sings with a deep feeling. It seems he speaks with a little burr. The anchor smiling by her painted eyebrows, is inviting everyone to dance. Students come out from the long tables and start to dance. Older people, mostly women. Some wore modest suits but some evening gowns. Few men in suits kept themselves with dignity. Noble gray hair and very simple faces made gaunt by life. Many grandmothers dance waltzes with each other. Slowly, barely swaying, or vigorously. Everyone is having fun. After the orchestra finishes the attendands start taking turns singing songs to minus soundtrack. 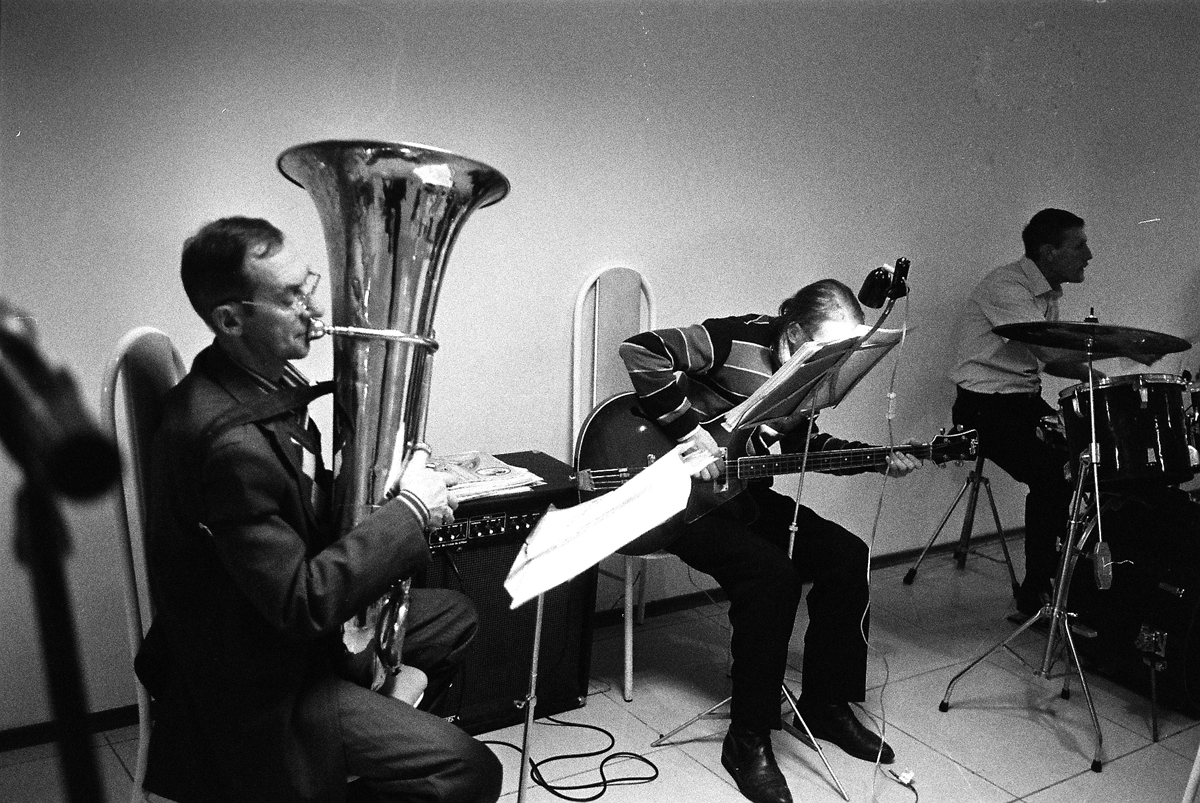 The anchor is approached: «Well sung and danced, – says grandfather with emphasis on A and I – but gotta go home, home to make warm.».
«Why does she sing my song?» — гyoungish woman says about her friend, about the words about the parched rivers and arranged dates. Young musical technician is bored stiff behind the decks. The creator of the wonderful tuning ask to take a picture of her. Outside the window there is darkness lighted by the Christmas garlands.

Street of darkened by time two-storey houses. Lampposts with lights extinguished. Silence of winter, torn by crow cawing. Sounds of sawmill and railway which are far from here. In the circle of light the black dog scratches behind the ear. Past and terrible time of enthusiasm is cooled and gone. Now came a time of strong residential barracks, mutilated plastic windows and satellite dishes.