Victory Day in the town of Sokol .

Red, blue and white flags on lampposts look like huge leaves. Signs “Congratulations, dear sokolchane” written by hand on the white canvas, arranged and hung on the main street. To the traditional recipients – “war veterans and homefront workers” – added “children of war”. A tall elderly man with glasses and an old blue jacket stands, leaning on a stick, in the street near his home. Uniform unicoat is hanging on the shoulders, there is a medal on his chest and a carnation in his hand. It seems he is not entirely sober, but he keeps himself straight. Passing by girls take pictures with him.
– I’m past sixty already. Have been working for 25 years in fire protection service. Congratulations. Thank for coming to say a few words. 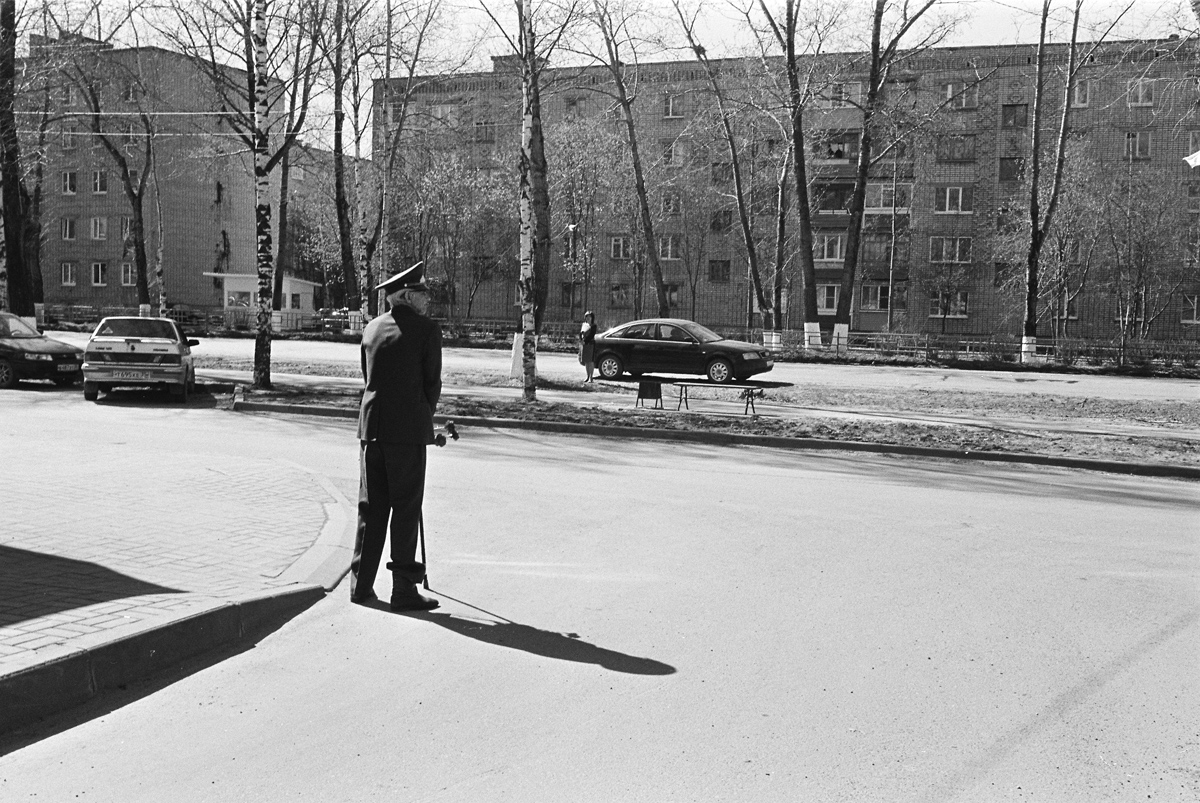 A man needs a reason to go on and be proud of his past life. Even if it is just for one day. Even if he does not deserve it – who is a proper judge? Anyway nothing could be changed and life is already had lived. Maybe he managed to catch a piece of universal, fostered by TV, respect for the elderly. And, maybe, some sincere sympathy.
On the same street a young man in a wheelchair moves his grandfather – a veteran, with lots of medals and drowned in flowers. Grandfather is aristocratic slumbers and medals jingle on potholes. When passerbies approach he brightened up and seems to looks above the cameras, though he is sitting.

War memorials, which usually we do not notice, are washed and dyed, are swarmed in flowers and wreaths. On such background the young mothers and their children photograph each other. Parade on main street ended. 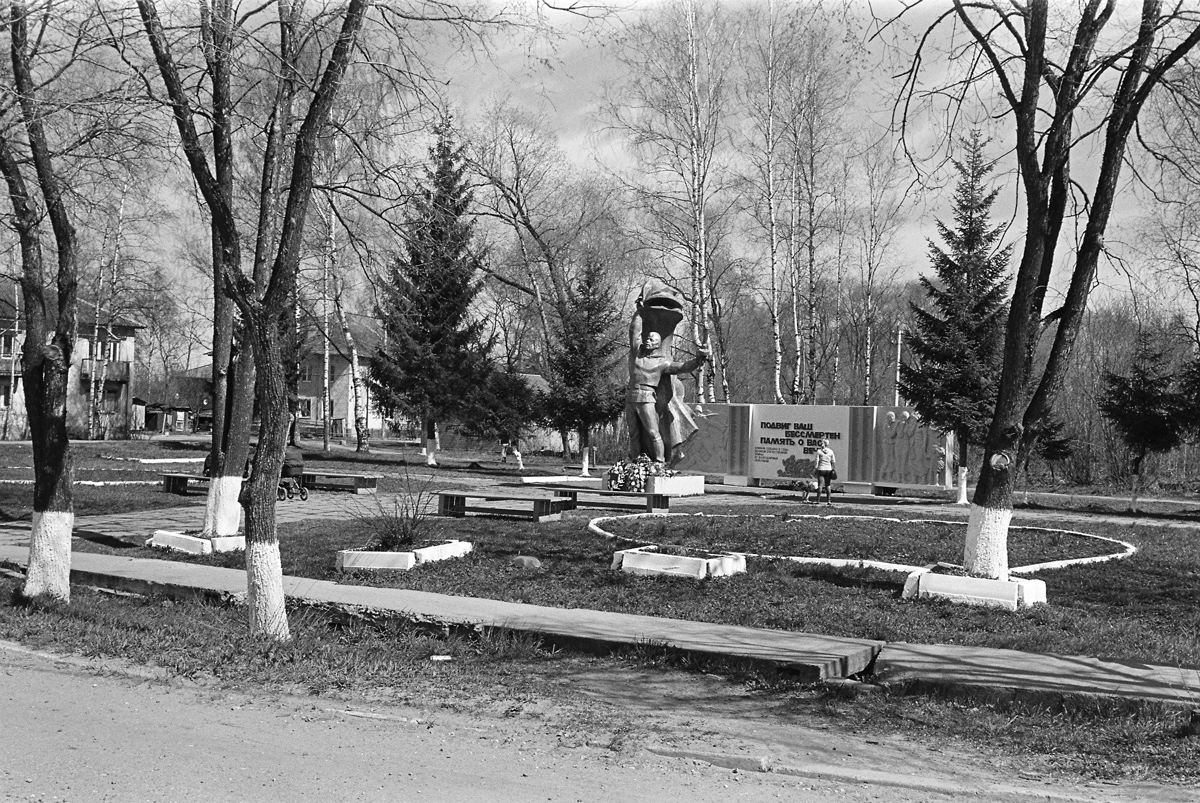 Sokol military fraternity celebrates in the restaurant “Edem.” Participants of Caucasian war, Afghans, military retirees and military commissar of the city occupied a long table in a large and empty room. At the head of the table retired lieutenant colonel Gregory Fedorovich in his commanding voice delivers a speech and gives floor to the audience. Everybody take turns, stand up and tell their short stories, sometimes really nice, and a toast.
– We have to continue doing good deeds.
– Patriotic education of the youth is the most important thing today.
– I’d like to toast and wish that you will always dream.
The atmosphere reminds both solemn meeting and banquet, though not all know each other. The restaurant owner says flowery Armenian toast, which merges both grandfathers who fought, the ladies present, local patriotism and common Soviet past.

– We have to continue doing good deeds.
– Patriotic education of the youth is the most important thing today.

Dark skinned waiter with St. George’s ribbon on a white shirt brings a new dish.
– A couple more rounds and we can relax, and I would like to give the word to Galina Nikolaevna. Galya, come – colonel commanding.
Beautiful short-haired woman who looks around 45 years old stands up and quietly, almost without emotion start talking: how she long sought the opportunity to go to Afghanistan as a paramedic, and how sought to take care of wounded on the first line, and how the entire squad was killed in the explosion of a ammunition. All stand up and drink for the dead. 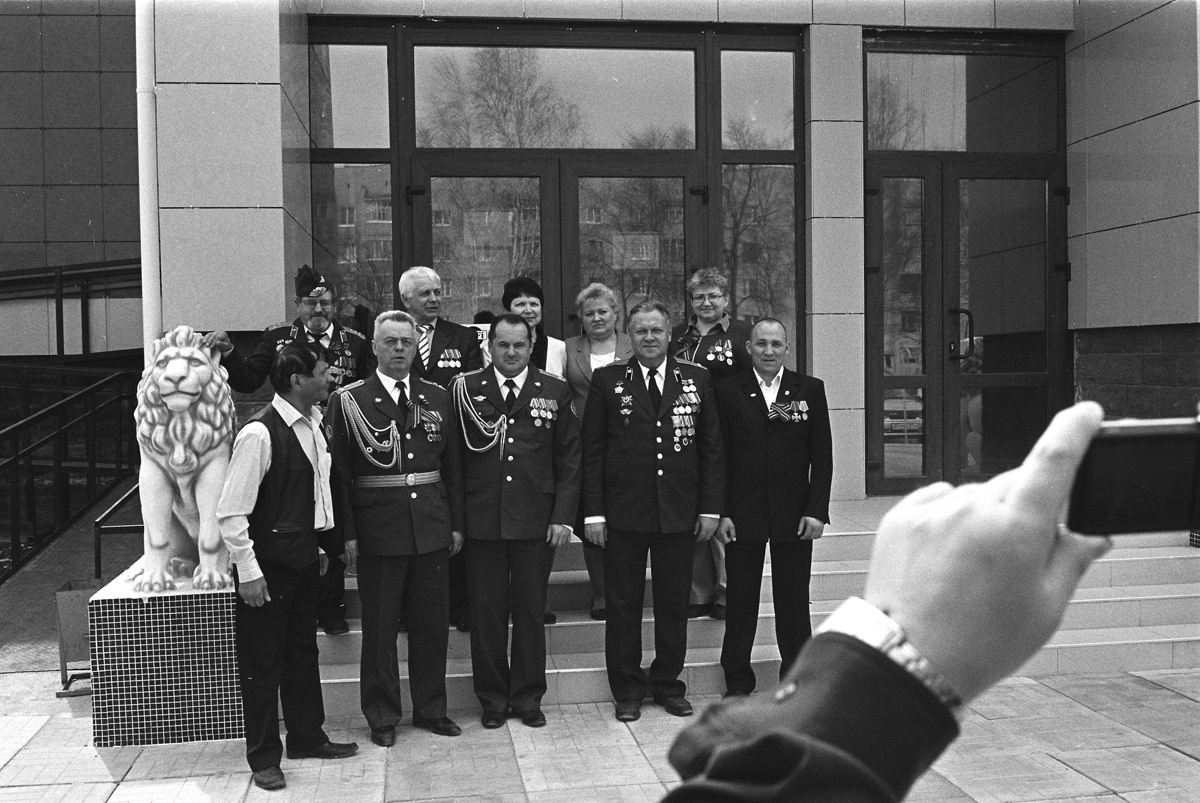 In the city bus there are dressed up children and the elderly. White bows and white hair on gloomy faces. It’s hot, all the windows are opened and somehow everybody keep silent. Conductor, the lady of indeterminate age with dyed hair, there is tattoo Sokol on her hand. We pass the houses “built by German prisoners.” Probably in every city there are such houses.

At the other end of town on the porch of the retirement home three old men leisurely smoke.
– What’s your thinking? Planning an escape?
– No place to escape. Except to my granny to the other side.
– Boys, afternoon tea. Afternoon tea – calling chef.
Inside there is a smell of soup and surprisingly, for this deserted on the whole part of the city, crowded. In front of the TV shows on which parade “demonstrate our military power,” thick woman who works in the kitchen, cleans boiled carrots. Here a typical day, same as always. The musical show was the day before.
– Valentina, please let’s go to the veterans. Maybe they’ll tell stuff huh?
– Whatever they’ll tell? And who?
– Well let’s go to Larionova.
Faina Vassilievna Larionov, cheerful grandmother in a warm woolen dress and glasses with thick lenses, is sitting on a bed in a double room.
-But brought away my medals until next year, if I live it. Ought to live. After all, I’m more than ninety.
She brushes her hair and pulls out commemorative books for medals, as if to prove that they indeed belong to her. She thinks me a representative of the administration and asks me why this year there were no gifts. There was a letter from Putin, but no gifts, no gifts at all. Administration probably has forgotten it. Probably, if there are no relatives, any person expressing an interest, looks like some sort of authority. Otherwise there no explanation for such an interest. In state house everything is state-owned. She talks about her youth, about how they want to live. The usual story.

-But brought away my medals until next year, if I live it. Ought to live. After all, I’m more than ninety.

-I was only 19 when the war began. Our boyfriends all left for war. It was only later – who married an old men or the maimed.
She talks all the time that she is a veteran of the war. Veteran of Great War – she says almost in syllables and fingers in the her frail hands the identities for medals. Tells how someone humiliated her, calling her medals fake.
Nurse brings another grandmother – Kopychevu Nadezhdu Michailovnu. 91 years old. Almost completely deaf and in a thick scarf, she is dry and very wrinkled.
-Tell me how you did fight, – screams in her ear nurse.
She immediately starts crying and confusedly, repeating herself, starts loudly, as all deaf people do, talking about the trenches, wounds, about work on timberplant during the day and sewing at night, about the bread made from sawdust and again about the trenches.
It’s amazing how strong her voice is. Still. Without any senile chatter. This voice drowns out almost all the sounds in a small room and outside the open window. It’s astounding how this voice is contained in such a small body.
Conversation joins another inhabitant of this room – the newcomer Rebecca Vassilievna Rudina, who was silent before. Quiet old lady with soulful eyes. The most quiet of them all.
-Though I am not a veteran, I am eighty one years old and I worked on the farm from the age of twelve. It was a tough time after the war. At least the pension is good now.
At some point everybody starts talking at once.
– My medals. I am Veteran of Great War.
– And we dug trenches, and I am an orphan – mother in her 30’s died of starvation.
– Since then 30 years I worked on the farm.
I want to close my eyes and see not these poor old women, but see them happy, recalling their already non-existent youth and their losses. They take me by the hand, sat beside him, and want to understand, as I realize, that only their story is important and worthy of my short attention. They repeat and repeat the same words, and after a while I suddenly realize that they almost do not feel my presence and do not even speak to each other, and talk with themselves. Everything merges into one buzz from which I recognize some phrases which stick into me loke needles, and I can not even understand who they said what.
When I was leaving nobody asked me to send photos. 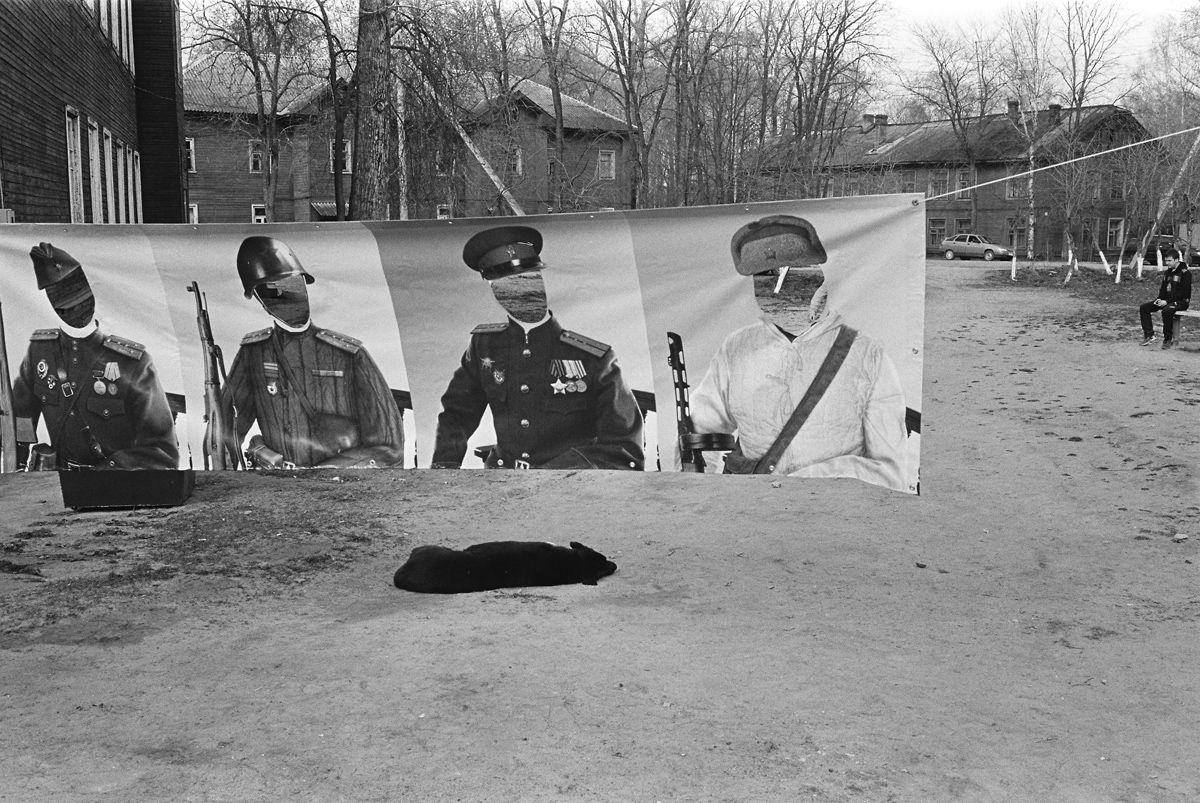 In the town square begins gala concert. There are unfolded the tents with the simple games, such as childlike shooting gallery and taking pictures in the soldiers form. Standard city holiday – barbecue, beer, cakes. The only distinctions are St. George ribbons and music of the war years in a modern arrangement. Performance of children’s and veterans’ choirs. And, afterwards, the broadcasting of a videotape with speeches by the Governor and Mayor. It is very light, on the screen upstage one can not see anything. There are not many people at all. The stage is guarded by two burly policemen. There is no merriment in the crowd, but there is also no solemnity, and it contrasts sharply with speeches from the stage about the “sacrifice and thank you.” It’s all very simple and somehow neighborly. Elderly man with a straight face silently lip-synching lyrics of a song. It seems only he hears the song amid the noise and hubbub. Girl tries to put a lighted candle at the monument to Oreshkov and Mamonov – the local heroes of the Soviet Union. Candle goes out all the time.

There is no merriment in the crowd, but there is also no solemnity, and it contrasts sharply with speeches from the stage about the “sacrifice and thank you.”

Not far from the scene local hooligans, armed with beer, without much enthusiasm are trying to provoke the young cadets. During a moment of silence those who sit on the benches in front of the stage stand up and it’s gets a little quieter. Seniors try take in hand the teens, and everyone is looking at the scene where on the screen a fire and all of the same St. George’s ribbons. And a familiar from childhood voice of Kirillov, and the words of “light of grief” suddenly seem particularly soulful, important and accurate, and, in spite of everything, not pretentious at all. Some people start crying. I feel a lump in my throat and leave the square. I go through the darkening deserted city and meet almost no one. Traffic lights are flashing. I hear music from behind. On the empty roads I see only ambulance cars. Lots of ambulance cars, hurrying in different directions.